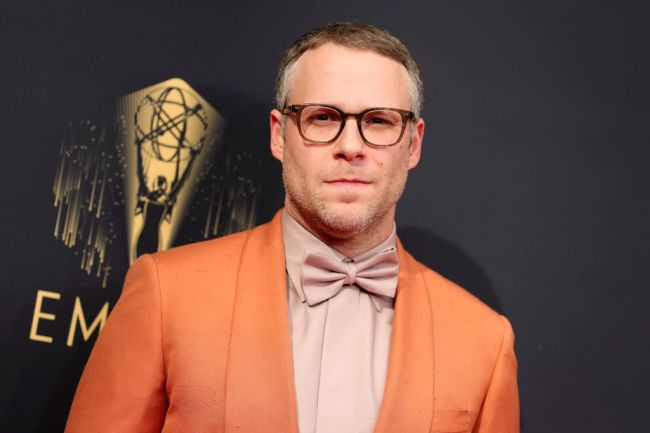 If you ever become a celebrity (I know you have it in you), here’s a pro tip: during award show season, endear yourself with the common folk by uploading a photo eating Taco Bell post-show or use your acceptance speech to feign surprise over your win despite crafting the speech months ago.

Seth Rogen used a unique tactic this past Sunday when he precluded his Best Supporting Actress in a Comedy presentation by accusing the Emmy Awards of lying about COVID protocols, claiming he would not have showed up if he’d known about the “hermetically-sealed tent.”

Actor @Sethrogen at last night's Emmy Awards: “There’s way too many of us in this little room. What are we doing? They said this was outdoors — it’s not! They lied to us. We’re in a hermetically-sealed tent right now. I would not have come to this. Why is there a roof?" pic.twitter.com/JNTWSgNU07

Welp, Emmy producers Ian Stewart and Reginald Hudlin are now taking Rogen to task for his pandering comments, telling Variety that Rogen was fully aware of the situation since he had gone to rehearsals earlier that day and had been informed about the show’s thorough protocols.

“We have worked for months and months to make that a safe space,” Stewart told Variety. “We’ve worked with all the health authorities. We were signed off by L.A. County, we came up with a plan with them. Those tables were distanced. Everyone was vaccinated. Everyone was negative tested in that audience. And also he had rehearsed. So he knew exactly what it was. So, I just felt it was an unfortunate misdirect from [Rogen]. Because it wasn’t just our decision. This is the health authorities’ decision as well, to say that it’s a completely safe environment if you do all those things.”

“It made three months of very hard work and many, many discussions to get it absolutely right feel a little bit wasted, really,” Stewart said of Rogen’s bit. “And then we just sort of played catch up. Because we wanted the audience to know how safe it was in there. We work in this industry, we’re desperately aware of COVID. I’ve done 50 productions nearly in COVID and not have people get sick. So, it’s deeply frustrating.”

In the wake of Rogen’s accusations, producers convinced Cedric the Entertainer and Reggie Watts to comfort the crowd by reminding them of the exhaustive protocols.

At the time of this writing, Rogen has yet to respond.