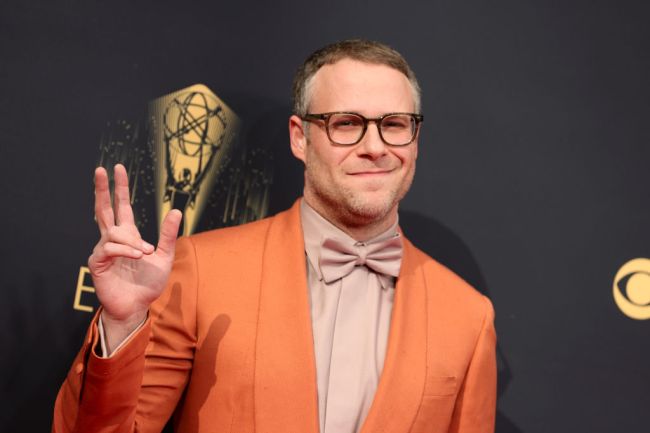 You gotta hand it to Hollywood award shows for their innate ability to become absolute trainwrecks no matter the circumstances. It genuinely feels like neither the Academy Awards nor the Emmy Awards have been able to get through a controversy-less show since, like, 2005. Yet another thing social media has ruined: award shows. Back in the 20th century, award shows were huge cultural events. Now, they’re mere afterthoughts, making more headlines for what they do wrong than what they do right. And I’m an entertainment writer and I’m saying these things — I can only imagine how casual viewers feel.

Last night’s Emmy’s awkwardness — which I already wrote about earlier this morning as I recapped Scott Frank’s disastrous acceptance speech — began as soon as the ceremony kicked off, as an orange-blazer-wearing Seth Rogen, who was presenting the first award of the night, slammed the Emmys for apparently lying to attendees about the COVID protocols put in place (for what it’s worth, Best Supporting Actress in a Comedy Series went to Ted Lasso‘s Hannah Waddingham, whose name Rogen mispronounced, by the way).

“Let me start by saying there is way too many of us in this little room! What are we doing?” Rogen said. “They said this was outdoors! It’s not! They lied to us.”

“I would not have come to this. Why is there a roof? It is more important that we have three chandeliers than that we make sure we don’t kill Eugene Levy tonight. That is what has been decided. I went from wiping my groceries to having Paul Bettany sneeze in my face. That’s a big week. If anyone is going to sneeze in my face, Paul, I want it to be you. All right, that’s all the jokes I wrote.”

The Emmy Awards were quick to roll out damage control, as both DJ Reggie Watts and host Cedric the Entertainer pointed out that everyone in attendance was vaccinated and had to present a negative COVID test.

“Despite what Seth might have said, we’re going to celebrate and party, but while we’re doing that we’re absolutely following all the health and safety guidelines that some really smart people asked us to do to keep us safe from COVID,” Watts said.

“It actually feels amazing in here unlike what Seth (Rogen) was talking about. It feels good. We’re all vaxxed. We had to get vaxxed to come here,” Cedric the Entertainer chimed in.

According to the Emmys, tables were set at least 6 feet apart to meet COVID protocols and nominees were only able to bring one guest. Nevertheless, Rogen was none too pleased. Other than Rogen, though, none of the other speakers or winners seemed too concerned.