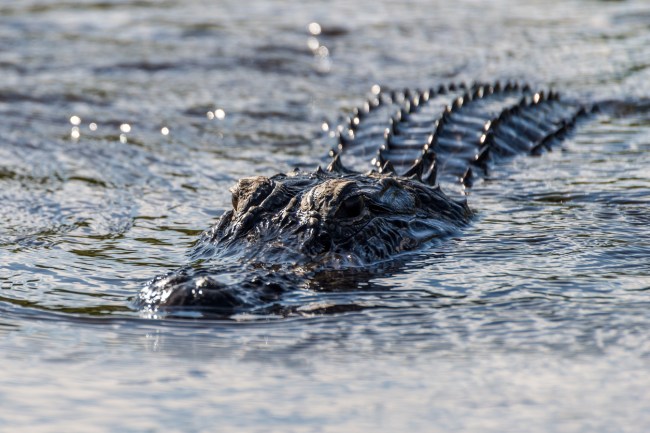 We’re literally 48 hours removed from the light-hearted story about a Florida man catching a sizable alligator in a trash bin, presumably to return it to its natural habitat.

We all giggled at the reptile heist and went on with our day.

This clip may be tougher to shake, as another Florida Man captured a Jurassic Park-esque gator swallowing one if its own like children do Dunakaroos at recess.

You, like me, may be wondering why on earth a gator would eat its young. Here’s what the site Alligator Farm has to say about it.

Though mother alligators are usually very good parents, some literature implies that male American Alligators tend to be unconcerned with their offspring, or worse yet, have been known to eat the hatchlings. Because of multiple paternity, it is possible the males don’t even know which hatchlings are theirs.

As Live Science points out, a new study finds that between 6 percent and 7 percent of young alligators fall victim to cannibalism.

The researchers analyzed data from years of alligator tagging and tracking programs at Orange Lake, a shallow, marshy body of water near Gainesville, Fla. Between 1981 and 1987, 267 stomachs from adult alligators that had been killed by hunters were examined for tags in an effort to find out how many tagged alligators were being cannibalized by other gators.

Thirty-three of the stomachs contained tags, for a total of 56 tags in all. One particularly hungry gator had eaten at least 14 other alligators. The other gators carried a tag or two in their stomachs.

In any event, the internet was understandably shook.

You still think this your parents yard after seeing this? pic.twitter.com/oleXITW0Wr

Right? That gator basically told them he runs that yard pic.twitter.com/vDdGo87nh2

So gators eat each other? pic.twitter.com/xBj0fUH04O

Probably everyone watching this: pic.twitter.com/KWwM0P6fSy

Y’all willing living next to dinosaurs is wild to me

Where’s this man when you need him pic.twitter.com/nxRdEqjmab