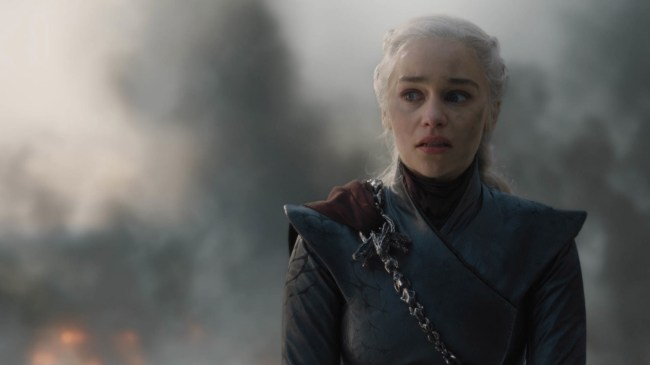 Spoiler warning, there might be some spoilers for episode 5 of the final season of Game of Thrones coming up.

That is something that ESPN’s SportsCenter anchor Michael Eaves DID NOT say when he opened his highlight package of the Game 7 classic between the Toronto Raptors and the Philadelphia 76ers on Sunday night.

Instead, Eaves started his NBA Playoffs recap with a major Game of Thrones spoiler, revealing a huge character death to anyone who had not yet watched episode 5, which included the ENTIRE West Coast because it hadn’t even aired there yet.

Obviously, this development did not sit well with viewers planning to watch the second to last episode of the show later on, so they proceeded to do what we do when things make us angry these days: they vented their displeasure on Twitter.

“I understand opening Twitter and getting spoiled. That’s on you. But you are watching SportsCenter. Probably one of the few places you can catch highlights without social media spoilers. U thinking you’re safe and BAM,” wrote one Twitter user.

“Hey @SportsCenter, how about you tell your anchors NOT to spoil a main character’s death in Game of Thrones at the top of the 11:00 Eastern show. Not really appreciated by those of us on the west coast who haven’t watched yet,” wrote another.

And on it went from there…

Hey @espn – it’s 8pm PST and @GameOfThrones @HBO has not aired yet on the West Coast… Good thing one of your broadcasters on sportscenter just dropped a major #spoiler. Thanks for ruining the second to last #GOT episode!

@SportsCenter HEY @michaeleaves !! WHY IN THE HELL WOULD YOU SAY ANYTHING ABOUT @GameOfThrones THANKS YOU ASS HAT. NOT EVERYONE HAS SEEN IT. HOPE YOU GET A CALL FROM @HBO NO WONDER I DON'T WATCH YOU "professional's" ANYMORE. BRAVO GENIUS! B…R…A…V…O! pic.twitter.com/PNJkSqXGte

@SportsCenter ok ok Caught the show and what the hell is with that Smendrick who spoiled the shit out of game of thrones. Can you make sure everyone gets to walk by and punch him in the face. What a pile of shit you are pic.twitter.com/p9jCqbsFmT

When feeding my daughter her bedtime bottle watching @SportsCenter and @michaeleaves spoils @GameOfThrones before I’m able to start it… come on man!!! At least wait a day. 🤬 pic.twitter.com/joNQyFtnmm

I get it if I get on Twiiter and see a #GameofThrones spoiler, but @SportsCenter ? C'mon Man! Do Better.

Hey @SportsCenter would appreciate it if you Anchors wouldn't spoil #GameofThrones. Talk sports only thanks….

Two brother-in-laws TWO, and a Sportscenter anchor spewing out Game of Thrones Spoilers less than 2 hours after it aired. The level of attention people use this shoe to achieve is obnoxious

@SportsCenter tell your host not to give out game of thrones spoilers 2 hours after the episode aired.

@espn @SportsCenter WHAT A DOUCHEBAG. ANCHOR JUST SPOILED GAME OF THRONES FOR 3/4 OF THE COUNTRY YOU FUCKING IDIOT. EVER HEARD OF TIME ZONES?

@SportsCenter just gave away a massive Game of Thrones spoiler in the very beginning of the show. A show that doesn't air for another hour on the west coast. EXTREMELY bad form.

SPOILER ALTERT! A courtesy @espn wasn’t polite to provide. Not that the Schlabach #UofA BS wasn’t enough, I waiting for my bride to press play on @GameOfThrones tonight (I pretty big important episode) by watching @SportsCenter to see the Raptor game highlights. And the idiot..

@GolicAndWingo You all need to beat the ass of the sportscenter jackass who spoiled the hell out of last nights episode of game of thrones. Do a promotional thing where fans get to gut punch him for charity 10 bucks a punch to the gut until he pees red syrup..