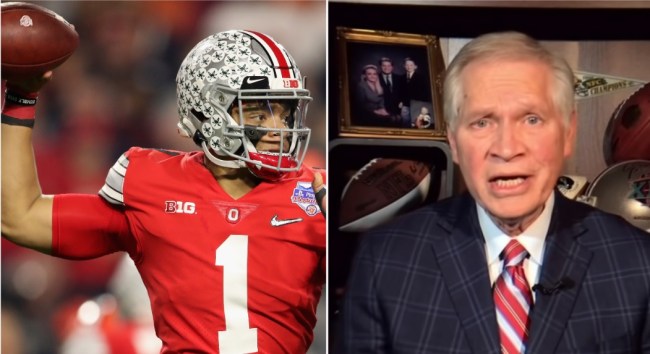 The NFL draft is less than two weeks away which means it’s that time of year when analysts say absurd things while giving hot takes on prospects.

On Tuesday during ESPN’s SportsCenter special on the NFL draft, Chris Mortensen bizarrely suggested that QB Justin Fields may have developed bad throwing mechanics from playing baseball at Ohio State

Chris Mortensen with a real humdinger here suggesting Justin Fields has bad throwing mechanics because he’s been playing baseball, a sport he has not played since 2018 pic.twitter.com/0idwpfUC11

“He also was getting ready to play baseball at Ohio State last year. So he was actually going between two sports, getting ready and then the pandemic – are they or aren’t they – those type of things might have messed with his mechanics a little bit.”

Fans crushed Mortensen over his take considering some of the top QBs in the game including Patrick Mahomes, Russell Wilson, and Kyler Murray played baseball before joining the NFL.

Patrick Mahomes and Kyler Murray played baseball. Everyone considers playing baseball as a good thing for your throwing mechanics.

The best QBs I’ve worked with all played baseball. Mahomes is a shortstop that just happens to play QB. You do not need to specialize! https://t.co/D4Nh3hVdJk