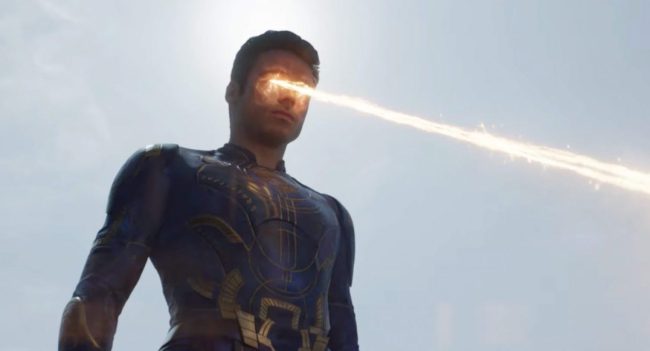 With just about three weeks left until the release of Marvel Studios’ Eternals, a first-look clip from the film was unveiled on Jimmy Kimmel Live! on Thursday night.

The clip features the Eternals, who are the Marvel Cinematic Universe’s oldest group of heroes (the film has been confirmed to span over 7,000 years, which represents new territory for the MCU), taking on the villainous Deviants. Specifically, Richard Madden’s Ikaris, Kumail Nanjiani’s Kingo, and Lauren Ridloff’s Makkari are the ones seen in action.

A First Clip from #Eternals pic.twitter.com/JYzhvguAI0

Given the sheer scale of the film, its events are set to have a “big effect” on the Marvel Cinematic Universe, as previously teased by Academy Award-winning director Chloe Zhao.

“I think we stand alone as a film for sure. But I do think we will have a very big effect on the future of the MCU with what happens in this film. Which, you know, as a fan, is really satisfying for me! I geek out,” Zhao told TotalFilm.

RELATED: ‘Eternals’ Will Be The First MCU Movie To Not Be Completely And Utterly Sexless