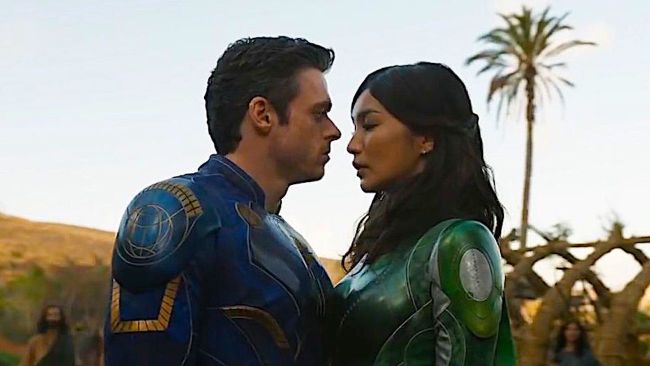 If there’s one major complaint that fans of the Marvel Cinematic Universe lodge against the franchise — other than its spotty track record of creating complex villains — it’s that the MCU is a largely sexless, borderline prude affair. Even when the MCU does work relationships into its plotlines — Tony and Pepper, Scott Lang and Hope Van Dyme, Steve Rogers and Peggy Carter, Peter Quill and Gamora, etc. — the extent of their romance is played out in their words, not in their actions. For example, Pepper and Tony don’t even kiss each other when he returns from Titan in Avengers: Endgame. Is that a big deal? Not in the slightest. But I imagine — since I’ve never personally fought a homicidal cosmic maniac in another galaxy — that after returning home from such an ordeal, the first thing I’d want to do is kiss my wife, and vice versa.

Eternals, though, is apparently set to be the first MCU to change that trend, as the film, which is set to hit theaters in about six or so weeks on November 5, has been officially rated PG-13 by the MPAA for “fantasy violence and action, some language and brief sexuality,” according to FilmRatings.

As /Film points out, not counting the first two MCU films, Iron Man and The Incredible Hulk — both of which were overseen by Paramount Pictures prior to Disney’s purchase of Marvel — Eternals is the first MCU film to be rated PG-13 for something other than “sci-fi action violence, some language, and brief suggestive comments.”

Given that the love triangle between Gemma Chan’s Cersei, Richard Madden’s Ikaris (both Eternals), and Kit Harrington’s Dane Whitman (a human) seems to be one of the film’s main plot points, it stands to reason that whatever “brief sexuality” we see in the film will involve two of those three. And while the extent of it may be them leaping into bed and taking their shirts off or something equally benign, it still represents a step forward for Marvel Studios in terms of making these films *just a bit* more adult. How quickly we forget that one of the first things we see Tony Stark do in the original Iron Man is have a one-night-stand with a journalist.

RELATED: ‘Eternals’ Director Teases The “Big Effect” The Film Will Have On The MCU’s Future