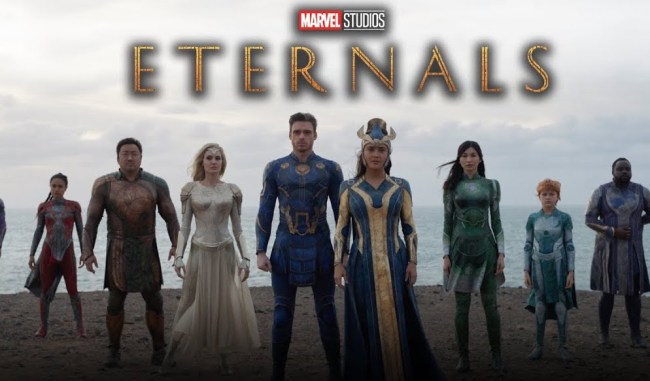 Not to get lost in between the well-deserved and wide-spread praise for Shang-Chi and the Legend of the Ten Rings and the unrelenting hype for Spider-Man: No Way Home, Eternals — from recent Oscar-winning director Chloe Zhao — is quietly one of my personally most-anticipated Marvel Cinematic Universe films in some time.

Not only will Eternals absolutely shatter the previous timeline of the MCU — outside of the “timelessness” of Loki, every story in the franchise has taken place within an 80ish-year period — as the plot of the film will span over 7,000 years, but the recent trailer revealed exactly how the film is set to completely restructure the MCU’s power scale, with characters known as Celestials literally creating universes in the palm of their hands.

With just about six weeks to go until the film’s release, the marketing machine is inevitably beginning to ramp up, as Zhao recently did an interview with TotalFilm where she teased how Eternals will have “big effects” on the MCU’s future.

“I think we stand alone as a film for sure. But I do think we will have a very big effect on the future of the MCU with what happens in this film. Which, you know, as a fan, is really satisfying for me! I geek out,” Zhao told TotalFilm.

How will Eternals impact the MCU going forward? None of the actors are drawn on specifics. “The Marvel snipers will take me out if I say anything,” deadpans Richard Madden, who plays Ikaris.

There have been suggestions that, given the grand cosmic nature of Eternals, that the film could be used to introduce Galactus, one of the most iconic Marvel Comics villains of all time. And if it does, that would *certainly* qualify as a “big effect.” Only time will tell. I’ll be on the press junket for Eternals, so I’ll be sure to do as much digging as I can.

RELATED: Marvel Studios Is Reportedly ‘Almost In Disbelief’ About The Quality Of ‘Eternals’