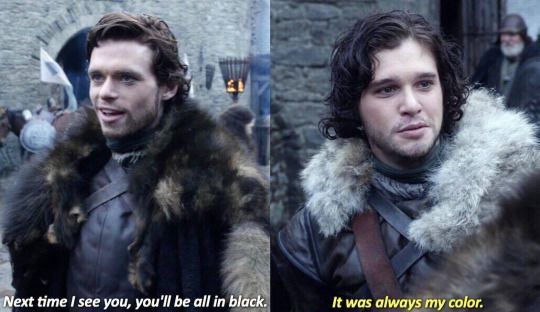 After literal years of waiting, Marvel Studios has *finally* released the trailer for Eternals, the upcoming epic from Academy Award-winning director Chloe Zhao.

While the first trailer is more about the vibe of the film than the actual plot, the first look at Eternals does contain a minor detail that’s blowing fans’ minds on Twitter.

As we pointed out over on our Post-Credit Podcast Twitter account, in the pilot of Game of Thrones, Richard Madden’s Robb Stark tells Kit Harington’s Jon Snow that the next time the pair see each other, Snow will be wearing black (as that’s the color of the Night’s Watch). And while the pair ultimately never cross paths again — Stark is killed in the Red Wedding before he and Snow ever reunite — the prophecy has still been fulfilled, as Harington will be starring alongside Madden as Dane Whitman, a.k.a. the Black Knight, in Marvel Studios’ Eternals.

A bit of stretch? Sure. But a fun, little meta-connection between two beloved franchises? Also sure!

In the ‘Game of Thrones' pilot, Richard Madden tells Kit Harington the next time they’ll see each other, he’ll be in black.

While the pair never cross paths again, the prophecy has come true, as Harington’s stars alongside Madden as the “Black Knight” in #Eternals ⚫🤯 pic.twitter.com/4kvpa7yj78

Here’s the official synopsis for Eternals, via Marvel Studios:

The Eternals, a race of immortal beings with superhuman powers who have secretly lived on Earth for thousands of years, reunite to battle the evil Deviants.

The film is arguably one of the most highly-anticipated Marvel Cinematic Universe films in years as the combination of source material and filmmaker has the potential to create something truly unique within the comic book movie genre.