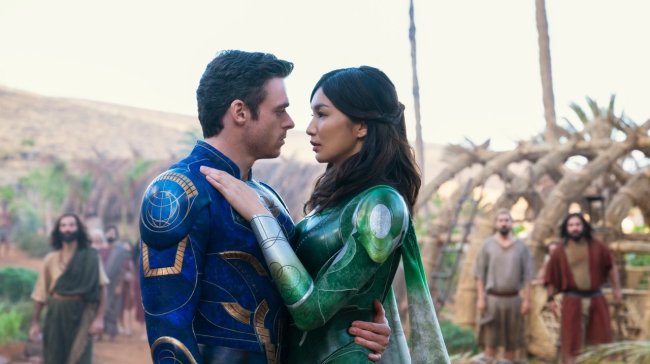 Given both the epic nature of its story and the Academy Award-winning pedigree of its director, I went into Chloe Zhao’s Eternals expecting it to wind up being a Top 5 Marvel Cinematic Universe film, and ultimately, I’m not quite sure it gets there, up with the likes of Guardians of the Galaxy, Avengers: Infinity War, and Captain America: The Winter Soldier. That’s not to suggest that Eternals left me feeling disappointed — in fact, quite the opposite — but rather, it simply failed to live up to the admittedly unfair expectations I’d placed on it.

When it comes to superhero movies, particularly origin stories, the number one goal of the film should be delivering characters that audiences not only root for, but invest in, and that’s exactly what Eternals provides. The performances are all excellent — every single one — and those performances translate to characters you genuinely care about despite their godly status. Whether it be screaming in agony following the death of a character or leaving the theater wanting to spend more time with them, Eternals flourishes where it matters most: crafting new MCU titans worth rooting for.

That said, the investment into the Eternals comes at the price of pacing, which was my biggest issue with the film: Eternals wasn’t slow in terms of boring, but given all of the exposition required to explain Eternals, Celestials, and Deviants, a lot of time is spent putting the chess pieces of the film in place, which takes some momentum out of the plot.

As for the look of the film, obviously, given that it’s a Chloe Zhao project, it’s visually striking and absolutely adds a new aesthetic to the MCU, which is something the franchise is in perpetual need of. It’s nice knowing everything you’re seeing isn’t in front of a green screen, for once. As a result, the third act is one of the most unique the MCU has had thus far, combining both unique set pieces with earned character dynamics that elevates the climax above the standard superhero fare. “Big blue beam in the sky” trope this is not.

The film was also a lot funnier than I expected it to be, but not in a usual contrived Marvel way — the humor feels far more natural because of the time spent getting to know the characters and their relationships with each other. And that is what makes Eternals such an achievement: all of its emotion, whether it be of the dramatic, romantic, or humorous variety, is born out of character relationships that feel legitimately developed and properly earned, a direct contrast of, let’s say, Steve Rogers’ brief and bizarre romance with Sharon Carter in Captain America: Civil War, which felt shoehorned into the plot for the sake of having a romantic arc in the film and not because it made the most sense for the character.

Movie fans seek different things from the art they enjoy, whether it be mind-blowing set pieces or quiet moments of human drama. Eternals effectively blends the two to such an extent that you leave the theater not only awed by what you’ve just seen but instantly desiring more. That is the sign of a good movie, whether that film is about two star-crossed lovers or an eclectic team of cosmic demigods finding their humanity. Luckily for Eternals, it just so happens to be both.