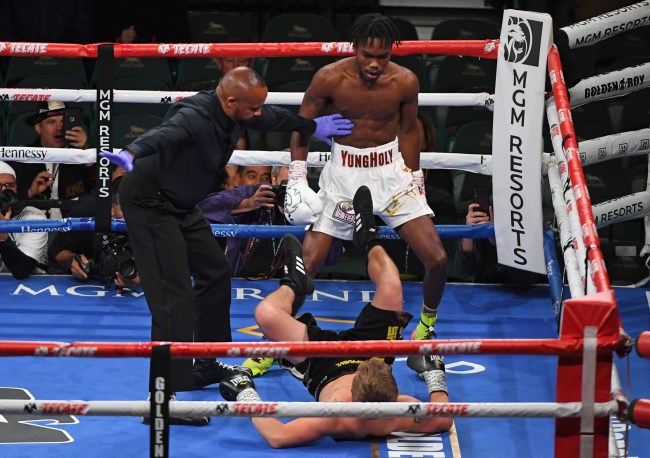 Evan Holyfield, the son of former heavyweight boxing champion Evander Holyfield, scored a knockout win in his pro debut on Saturday night in a fight on the Canelo Alvarez-Sergey Kovalev undercard, putting down his opponent Nick Winstead 16 seconds into the first round.

The 22-year-old Evan Holyfield, brother of Carolina Panthers running back Elijah Holyfield, showed tremendously fast hands as he overwhelmed his opponent as soon as the bell rang and is now 1-0 after his quick defeat of Winstead, 21, who fell to 0-2 in his pro career.

Winstead, for whatever it’s worth, didn’t seem too thrilled with the stoppage of the catchweight bout, which originally contracted for junior middleweight until Winstead failed to make weight.

Some fans also questioned the finish with Winstead not even being given an eight-count.

“It was such a blessing to be able to showcase my talent on the card like this and God bless us all,” Evan Holyfield said after the victory. “I was just expecting to box and I just went out there and did my job. I was zoned in and God just had me.”

Prior to his debut, Evan and his father Evander shared a special moment at the weigh-in for the young fighter’s pro debut.