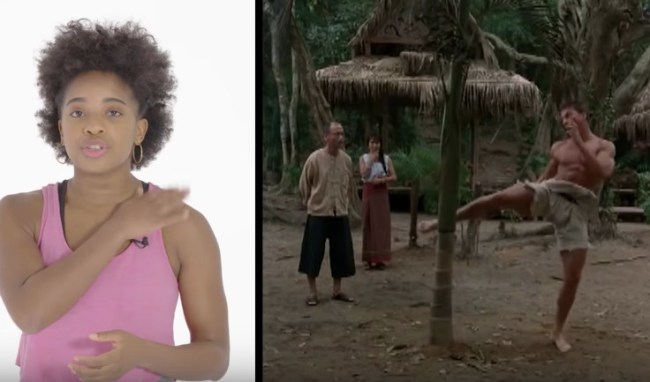 Action films have come a long way in the past quarter century.

I grew up watching the Karate movies of the late 80s and early 90s like Bloodsport, Universal Soldier, Cyborg, Timecop, and Lionheart. Actually, upon reflection I apparently grew up on Jean-Claude Van Damme movies. JCVD raised me.

Other major players in this genre would be Bruce Lee, Chuck Norris, Jet-Li, Steven Seagal, and Jackie Chan. I could include a hundred more on this list, apologies if I left someone out, but I want to get to my point.

Generally, in these Karate films you would have one complete badass cast as the protagonist who was well trained in multiple martial arts disciplines. Then you’d have a thousand nameless and faceless actors coming at that person while getting their ass kicked. It was their job to get punched in the face and go down while it was the star’s job to make it look real and sell it. Think about Keanu Reeves fighting 10,000 people at once in The Matrix sequels.

Things have changed. You can’t build an entire film around one actor’s skills these days and expect people to spend $25/ticket at the box office.

A film set will work with highly-trained martial artists to ensure a scene is as realistic as possible, and that’s exactly what we see on display here (but in reverse).

Raquel Harris is a Muay Thai champion and a decorated competitive fighter. Here, she takes us through some iconic fight scenes from Hollywood history and breaks them down.

She explains whether the scene used actual martial arts moves or was completely implausible. In a lot of cases, it’s pretty obvious that a training scene that looks great on film would do nothing but injure a fighter if they actually trained that way. She also then demonstrates the moves if they’re legit.

Some of the actors she breaks down include Jean-Claude Van Damme, Chuck Norris, Charlize Theron in Atomic Blonde, Mark Wahlberg, Jake Gyllenhaal, and more.

That’s is how I feel after seeing her tear apart some iconic fight scenes. Likewise, I also feel vindicated that the martial arts movies from the 80s and 90s often includes some badasses who were genuinely trained in martial arts and weren’t just selling it for the camera.