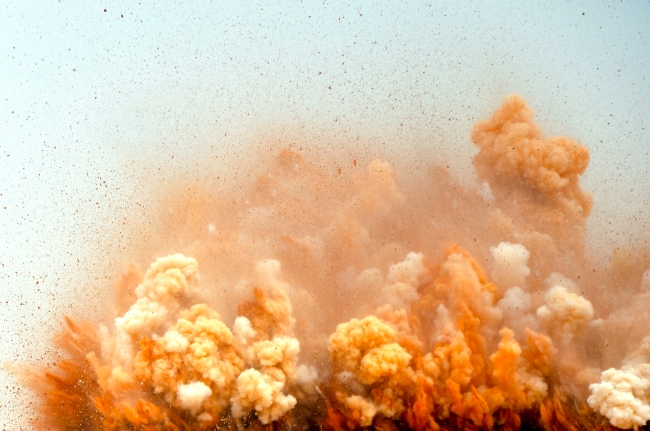 It has been 50 years since a 45-foot sperm whale was exploded on a beach in Florence, Oregon, an incident that would become what most people consider to be America’s first-ever viral news story. To celebrate the 50th anniversary of this truly outrageous event they’ve remastered the old TV footage which includes the rotting whale exploding into a million pieces and raining putrid mayhem down in every direction.

“Our cameras stopped rolling immediately after the blast. The humor of the entire situation suddenly gave way to survival as huge chunks of whale blubber fell everywhere. Pieces of meat passed high over our heads while others were falling at our feet”

For anyone out there who has never seen this footage before you are truly in for a treat. The townspeople blew up the stinky rotting 45-foot sperm whale on November 12th 1970 after it washed up on the beach and began to decompose.

A car over a quarter of a mile away was destroyed by a large chunk of exploded rotting whale.

They used a half-ton of dynamite to blow up this whale. Sperm whales are huge. They’re the largest toothed whales and an adult male sperm whale can measure 52-feet and weigh 90,000 pounds. For comparison’s sake, 6,000 pounds of dynamite was used to make George Washington on Mt. Rushmore and blow up an entire rock mountain. They used 1,000-pounds (half-ton) to blow up a single rotting whale on a beach.

The aftermath of the explosion is arguably one of the best payoffs in TV history. The carnage from the explosion is incredible. I only wish they could’ve gotten someone who was there 50 years ago to appear on camera for the 50th anniversary of this event.

For a full rundown of everything that happened and went wrong on that Oregon beach 50 years ago you can head on over to KATU News where they’ve put together an amazing feature for the 50th anniversary of this.