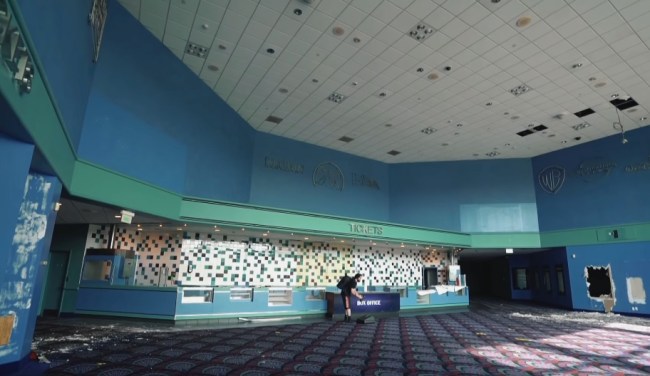 As a kid, I spent a considerable amount of time in movie theaters, even though I somehow missed one of the biggest movies of the decade.

Movie theaters were an escape from the summer heat or a good way to kill time during the dull, dreary days of winter.

The movie theaters of my youth are long gone, knocked down, and replaced with IMAX theaters fitted with recliners and waitresses.

Few movie theaters chiseled right out of the 90s are still in business and the ones that still exist will probably be decimated thanks to the Covid-19 shutdown.

Dark Exploration Films, known for “stepping into the past, one building at a time”, uncovered this 90s movie theater that was shut down and abandoned sometime in 2006.

Unfortunately, all of the old movie posters are gone, but the place is chock full of 90s nostalgia from the carpeting to the tiled walls and the fonts on the signs.

The crew at Dark Exploration mentions how bad the theater smells which makes me wonder if people didn’t live inside for a while, or might even live inside now. Thankfully, the gang brought masks.

Check out this stroll through childhood and remember all the films you saw in a building that probably looked exactly like this theater.