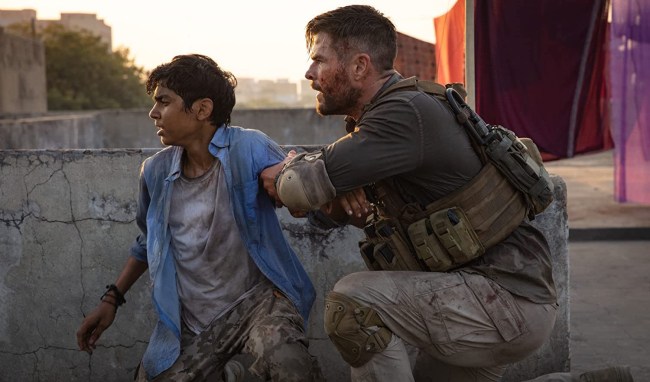 Did you realize that No Time To Die, the final James Bond movie starring Daniel Craig, was supposed to hit theaters, like, three weeks ago? Yup, the original No Time To Die release date was April 10 and now we won’t get it until November 25. Brutal, I know. How about Black Widow? I was supposed to be heading to the theater on Thursday night to see Marvel Studios kick off Phase 4 of the MCU, but that’s been delayed to November as well. A Quiet Place Part II, Fast and Furious 9, Mulan… the list of delayed movies goes on and on.

So, when Netflix dropped an action flick written and produced by the guys behind the highest-grossing movie of all-time and starring a legit movie star in Chris Hemsworth, I treated it as if it were the first, last, and only Blockbuster we’ll get this summer. And I enjoyed the hell out of it! In fact, I suspect Extraction may turn into Netflix’s very first action franchise.

According to the team behind the film, writer/producer Joe Russo and director Sam Hargave, another film following the adventures of Tyler Rake — whether it be a prequel or a sequel — is certainly possible.

“We thought it was necessary in that moment, to justify the use of deadly force by Ovi (Jaiswal), to put Rake (Hemsworth) in a compromised position where his life was in danger. It did come up; we discussed how is [Gaspar] gonna beat [Tyler Rake],” Hargrave said.

We discussed it and our backstory is that those two guys — and, spoiler alert, who knows whether there could be prequels or sequels could possibly go if Netflix likes the movie —but their backstory is these guys trained together and they spent a lot of time together in the military and even outside of that, in private military sector, and their skills would be matched but they just went in different directions. Harbour[‘s character] ‘went native,’ you might say. He found a life in Bangladesh and stayed there and Rake kept going down that [other] path. But their skillset, if you matched them up, they’re kind of evenly matched.

So, to make up for the fact that Rake has been doing [this work] consistently and Harbour[‘s character] has not, we made sure that Chris had enough damage, if he was beaten down enough, we’d believe that Harbour had the skills to take him down.” [via Collider]

Producer and writer Joe Russo also touched on the idea of continuing the franchise, noting that continuing the story of a character is something that he and his brother love doing:

Certainly, when you find an interesting character and an interesting world to explore with a great director, you’re going to want to continue to explore it. My brother and I love franchise filmmaking, we love serialized storytelling. I just think you can do interesting things with characters as you progress their story. You’re limited by two hours, you can only say so much, it’s a very specific craft.

When you expand the amount of time you put that character onscreen, you can make other choices with them. So, it would be exciting at hell to go back to work on a second film in that series. We’ve had the preliminary conversations. The question is: Does it all make sense? Can we find the right story to tell? Are we happy to go tell that? Does Sam want to tell that story? Does Chris want to tell that story? There’s still a lot of work to be done.” [via Collider]

If Extraction performs for the streaming giant, there’s no reason to believe Netflix won’t make another film in the franchise.