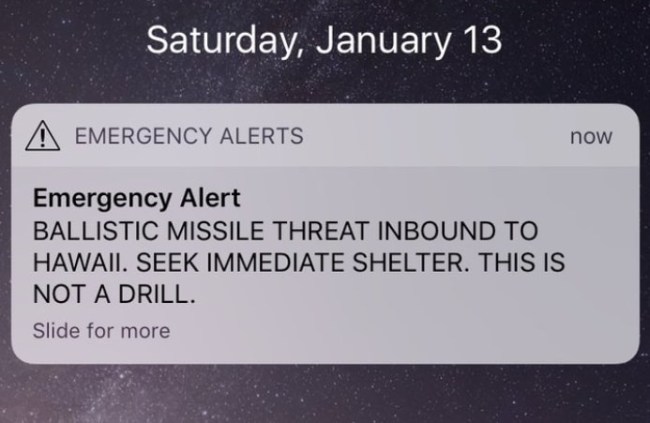 The ominous and horrifying warning was eventually corrected by the EMA, but it took a mind-numbing 38 minutes for them to issue another text saying the original warning was a false alarm. In those 38 minutes, Hawaiians believed their world was truly coming to a tragic end. The horrifying accounts of people scrambling to take cover and saying their final goodbyes to loved ones are absolutely heartbreaking. There were numerous accounts of people on vacation receiving the warning or seeing it on TV and then assembling in the lobbies of the hotels they were in. Many were extremely panicked and some crying with tears of fear.

This was my phone when I woke up just now. I'm in Honolulu, #Hawaii and my family is on the North Shore. They were hiding in the garage. My mom and sister were crying. It was a false alarm, but betting a lot of people are shaken. @KPRC2 pic.twitter.com/m6EKxH3QqQ

“We got away from the windows and crouched down. My 6-year-old was crying and praying and my 4-year-old kept asking, ‘What is a missile?’”
The false alarm in Hawaii caused widespread fear: https://t.co/UbW9EfE3VN pic.twitter.com/QWNuZ5dU9b

So sorry for all the people in Hawaii who went through that — we know someone who’s there with her family. Crying in closet texting goodbyes to loved ones, husband shielding their baby. Sounds traumatic. Hang in there, folks.

Follower from Hawaii tells me, “People were crying and running home to be with their kids thinking it could be their last moments!! Fucking scary.”

Pt 2. Students at University of Hawaii at Manoa panicking after missile threat was issued pic.twitter.com/7vO0n2qndf

“This morning we were actually getting ready to go to the beach. I’ve got a two-month-old, my family was together,” Adnan Mesiwala said. “When we got the alarm, we were actually terrified. We’re on the 36th floor of our hotel, and we didn’t know what to do. We were kind of frantic, we got our shoes on, we’re about to come downstairs when the lobby told us to stay indoors. We’re still nervous. We were up 36 floors. We put the baby in the bathroom. We didn’t know what else to do – in a stroller – in case we had to run.”

“You’re thinking, ‘Oh my gosh, are we going to die? Is it really a missile (headed) our way, or is it just a test?'” Jocelyn Azbell told CNN. “We really didn’t know.” She did hurry in the hotel’s basement to take cover from the alleged missile attack.

“I wish I could say I reacted appropriately, but I froze,” Julie Hollenbeck, who received the message while packing to leave the Sheraton Maui, told Slate. “‘This is not a drill’ freaked me the eff out. I was terrified, my husband was terrified, and I instantly went cold.”

One man dealt with his impending demise in quite the Hawaiian way. “Well, if I’m going to die, I’m going to do it on the beach and have a Mai Tai,” Hollenbeck heard a man say as he laughed and walked toward the beach.

A father was faced with a Sophie’s Choice as to decide which of his children to see in the possible final moments of their lives. The dad’s eldest child, his wife, and his two youngest kids were in three different locations that were all far apart.

“Right now, I’m in tears, pulled over on Bishop Street. Just five minutes before warning, I dropped my oldest at the airport and drove to Nimitz Zippys,” the anonymous man wrote. “There I found out about the threat and had to decide whether to shelter there, drive to my two younger children at home, go back to the airport or go to be with my wife at work. None of these destinations were within 15 minutes of where I was.”

“I chose to go home to the two little ones – I figured it was the largest grouping of my family – knowing I likely wouldn’t make it home in time,” he said in a post that was shared by the Washington Post’s Gene Park. “I was tearing up South Street to the freeway when I heard it was a mistake. Fuck you Hawaii Civil Defence.”

My friend in Hawaii got the alert and had to quickly choose between which members of his family he would spend his last moments on Earth with because they were ALL too far apart from each other. He had to make the difficult choice of going immediately to his youngest children. pic.twitter.com/n8LNPiVscP

Then there was this account of making the best of the scary situation.

My dad is in Hawaii for travel… pic.twitter.com/6JXecxuIBt