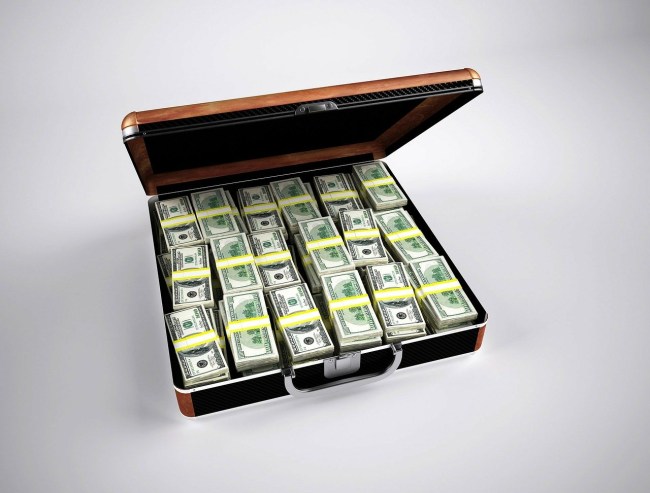 In one of the most bizarre incidents I’ve heard about in the past few months, a family in Virginia found a pile of cash sitting in the road that totaled $1 million and they turned it in to the police.

The family was cruising along the road on Saturday when the car in front of them swerved to avoid something in the road. Instead of swerving and going about their business like every other person on the planet they inexplicably stopped to investigate what the object is and remove it from the road.

It turned out to be a bag full of cash. And 15-feet away there was ANOTHER bag of cash. Together, those bags totaled a million dollars in cash. Instead of pulling a No Country For Old Men and heading for the border with the money they instead went for the police and turned it over to the cops, according to the report fro WTVR:

Emily Schantz said that she was driving in the car with her family when she noticed the car in front of them swerving around an object in the road.
The object, which turned out to be a bag, was hit by the Schantz family car.
The family, out for a Saturday afternoon drive, thought that someone had left trash in the middle of Broad Street.
The family put the bag, and another bag spotted 15 feet away, in their pick-up truck.
What they did not know was that they were driving around with close to a million dollars in cold hard cash.

“Inside of the bag, there were plastic baggies and they were addressed with something that said ‘cash vault,’” Schantz said.
The Schantzes called Caroline deputies upon making the discovery.

“They came back to Caroline, and found out they’d been riding around with almost a million dollars in the truck,” said Maj. Scott Moser.
Deputies are investigating, but believe the mail bags belonged to the postal service and that the money was meant for a bank. (via WTVR)

How do they not know whose money this is by now?!

Things are tough out there right now. Tens of millions of Americans are without jobs right now. The global economy is shrinking. I cannot say for certain that if I saw $1 million in STRAIGHT CASH sitting in bag in the middle of the road I wouldn’t at least sit on that for a few days until I saw reports about it in the news.

The Boy Scout in me is saying ‘report the cash missing immediately’ but the realist in me would be thinking like Matt Damon in Rounders “really all I’m thinking about is Vegas and the f***in’ Mirage.”

In reality, I’d 100% turn it in. Not because of some sense that the money was desperately needed elsewhere. But if I’m being honest with myself, I’d turn it in because I’d be completely terrified of finding myself in a No Country For Old Men scenario with a murderous psychopath tracking me and my family down for the cash.

What would you do? Would any of those bills have floated away?

As a thank you to the family that turned the million dollars in cash in, Maj. Scott Moser visited them and turned on his police sirens for the family’s kids. That was their prize. Some cop car lights. A million dollars and they got some lights turned on.