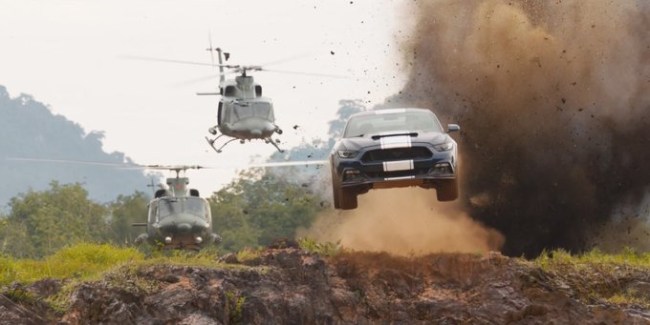 There’s everything in the official trailer for The Fast Saga from stealth jets swooping in to scoop up a Mustang, a rocket-propelled Pontiac Fiero, an armored tractor-trailer that flips over and is seen from blocks away, a Jeep defying gravity as it drives up a rope bridge that has collapsed, helicopters shooting missiles at cars, a Dodge Chargers SRT, swinging over a gully by a rope, and Helen Mirren driving a supercar.

The ninth chapter of Fast and Furious known as F9 is going all out on the action.

“The action hurtles around the globe—from London to Tokyo, from Central America to Edinburgh, and from a secret bunker in Azerbaijan to the teeming streets of Tblisi,” the official synopsis states. “Along the way, old friends will be resurrected, old foes will return, history will be rewritten, and the true meaning of family will be tested like never before.”

The Fast & Furious franchise has made $5.9 billion worldwide since 2001.

The Fast Saga hits theaters on May 22.

Here is the Fast & Furious 9 teaser trailer that was released last week.