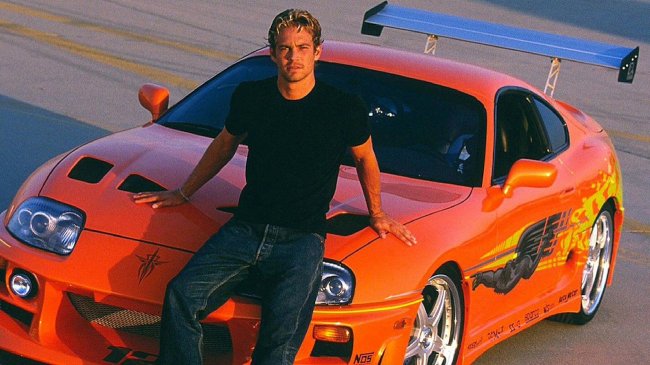 I always get a chuckle out of the fact that the Fast and Furious franchise, which now literally finds itself pushing the boundaries of Earth into outer space, used to be about the hardcore, underground street racing scene in Los Angeles. If that isn’t the perfect metaphor for what has Hollywood has become since the turn of the millennium, I’m not sure what is: bigger, faster, louder, more. That’s the name of a Daft Punk (R.I.P.) song, right?

And because the franchise began as a series about street racing, it required actual street racing cars, such as the 1994 candy orange Toyota Supra that Paul Walker’s character Brian O’Conner drove in the original film, which recently just sold for a record-breaking $550,000 at Barrett-Jackson‘s Las Vegas auction.

Built by Eddie Paul at The Shark Shop in El Segundo, California, this car features the legendary twin-turbo 3.0-liter 2JZ-GTE engine, “Nuclear Gladiator” graphics by Troy Lee Designs, a Bomex body kit, APR racing wing, 19-inch Racing Hart M5 wheels, a momo steering wheel, and a number of gauges. The one downside is that the sports car is actually a 4-speed automatic where the shifter knob was added into the interior for the sake of the movie. [via HypeBeast]

To be clear, this specific Supra was one of many made for the making of the film, as it was not used for racing scenes, but for interior and exterior shots. The car w was actually repainted and modified to become the Supra of the character named “Slap Jack” in 2 Fast 2 Furious but was eventually restored to its original look. Given the price it just fetched at auction, that was a wise decision.