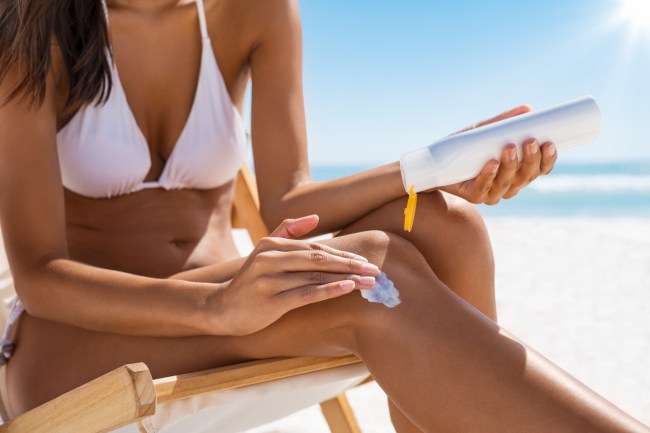 Summer is almost here and that means you’ll actually go outside to enjoy the weather instead of watching Season 3 of The Office for the 18th time. That also means exposure to the sun, which can lead to skin cancer. But a new study finds that sunscreen seeps into your bloodstream after only one day and that too could be hazardous to your health.

The study is titled “Effect of Sunscreen Application Under Maximal Use Conditions on Plasma Concentration of Sunscreen Active Ingredients” and was published on Monday in the peer-reviewed medical journal JAMA. The new research by the U.S. Food and Drug Administration (FDA) found that applying sunscreen enters the bloodstream, which could introduce potentially harmful chemicals to the body.

Sure that sounds scary, but at least your internal organs won’t get sunburned.

The study analyzed blood samples from 24 healthy people who applied the maximum recommended level of sunscreen to 75 percent of their bodies four times a day for a week. The volunteers used spray, cream and lotion sunscreen. Scientists discovered that the active ingredients in sunscreen were in the participants’ bloodstream even 24 hours after applying and three of the ingredients remained in the bloodstream for seven days.

In the volunteers’ blood, scientists found active sunscreen ingredients: avobenzone, oxybenzone, ecamsule and octocrylene. These four chemicals are ones that the FDA said needed to be researched by manufacturers before they could be considered “generally regarded as safe and effective” if they are indeed absorbed into the body.

The FDA warned that “these changing conditions of use and differences in sunscreen formulation may also lead to greater absorption and possibly additional risks.” The study wants further research on how these chemicals react to the body and the possibility of “systemic carcinogenicity,” plus potential developmental and reproductive issues. So the stuff that protects you from cancer might also give you cancer because everything gives you cancer.

The FDA still advises using sunscreen while they try to conclude if suntan lotion can be harmful to the human body. Nearly 9,500 Americans are diagnosed with skin cancer everyday. There were almost 300,000 new cases of melanoma in 2018, making it is the 19th most commonly occurring cancer, according to the World Cancer Research Fund. Sunscreen is still one of the best methods of protection.

“Broad spectrum sunscreens with SPF values of at least 15 remain a critical element of a skin-cancer prevention strategy,” the FDA said. The government agency recommended using other protective measures such as sunglasses, hats, and clothing that covers more of your body. They also recommend not going out in the middle of the day when the sun’s dangerous UV rays are at their peak.

So to recap, just never go outside because it’s too dangerous.