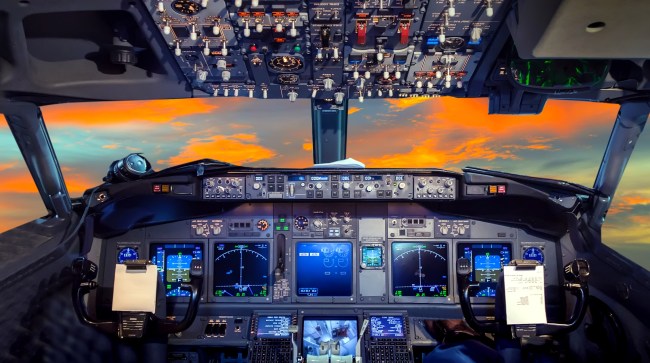 Two FedEx pilots flying a cargo plane near Monterrey, Mexico had an encounter at 37,000 feet with a UFO that has experts perplexed.

The pilots claim that as they were flying near Monterrey, Mexico a bright light dropped down from the sky, stopped at their altitude, shot them with a beam of light, then moved in tandem with the plane for over 30 minutes before flying away, reports DailyMail.com.

The UFO incident, which occurred on March 19, 2020, was captured on video, along with audio revealing their dialogue during the sighting.

While the two pilots remain unnamed, the captain of the Boeing 767 cargo plane is “a career pilot with 19 years of experience flying wide-body aircraft for a major cargo company with an additional 10yrs flying KC-135 refueling tankers for the US Air Force,” according to a National Aviation Reporting Center on Anomalous Phenomena (NARCAP) report. The first officer is “a career fighter pilot that flew f-15s before working in the private sector.”

The initial reporting of this UFO sighting shed little light on the details surrounding it, but this week NARCAP executive director Ted Roe spoke with DailyMail.com and offered up some new insight.

‘The FAA literally will not accept their reports,’ he said. ‘The aeronautical instruction manual, which is the primary manual for air crews, tells them if they want to report a UFO they can contact a civilian UFO reporting center.

‘Recently we’ve had this UAP Task Force and government activity on the subject. In the report, the Director of National Intelligence on June 25 stated that UAP are a hazard to aviation, and they were rather clear about it.

‘When they were out looking for data, I can’t imagine what it was like going into the FAA’s offices, and saying ‘you guys must have all this great UFO data, we need it now,’ and there isn’t any because they’ve been telling the pilots they don’t take those reports.’

Footage of the UFO incident near Monterrey, Mexico taken by the FedEx pilots, described as “competent airmen, highly experienced with observing and identifying aircraft, and are capable of determining normal observations and incidents from unusual ones,” was analyzed by Roe’s group at the NARCAP.

In the video, one of the pilots can be heard talking about “a brilliant yellow white plasma object teardrop shaped” object in the sky.

They were so concerned about what they were seeing that the daptain engaged the Combined TCAS and cockpit display and activated the Airborne Collision Avoidance System SSR (Secondary Surveillance radar) system.

Radar did not detect anything in the sky.

According to the NARCAP report, “The UAP/Light came from above and stopped/hovered near FL37, about the same altitude as the aircraft, shone a light on the 767 and briefly approached the aircraft. Then it instantly matched the speed, and heading of the aircraft and maintained a consistent separation.”

a. The light descended vertically, stopped abruptly, and shone a light on the 767 causing the crew to believe that there was another airliner on a collision heading with its landing lights on.

b. It changed direction from vertical descent to a sudden stop/hover, to approaching the aircraft briefly, to taking the same heading and speed of the aircraft at about the same altitude and an estimated distance of 1-2k ft.

d. The UAP/Light changed colors and turned away from the aircraft on a perpendicular heading, West, just inside the Mexico/US border.

e. The UAP/light did not have wings or running lights. It was a new and unique observation to the experienced air crew.

These movements, the report explains, “are not consistent with known aerial phenomena but they are characteristic movements of UAP.”

“We have a database going back to 1916. It describes four basic types of UAP encounters and they are balls of light, spheres, cylinders and discs,’ Roe told DailyMail.com.

“I went through the analysis. There was some argument that it could have been an astronomical effect. Venus was quite bright that night.

“But when you take the entire narrative of how they describe it dropped in vertically, stopped at their altitude and then paced their aircraft, that is a very consistent story. We’ve had many of those.”

Roe also added that the FedEx pilots’ account of their UFO experience is “very consistent with what pilots have been reporting for over 100 years.”

“The primary difference being that this case is on video. Now there are cameras in the cockpits and they are validating what pilots have been describing anecdotally for over 80 years and the work of NARCAP over the last 20 years,” reads the report.

Watch that video below…