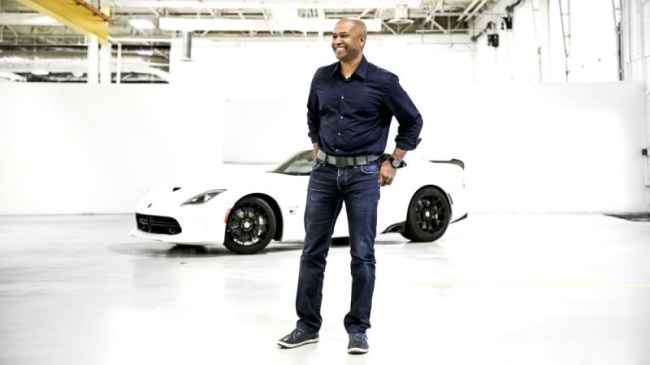 Fiat Chrysler’s Head of Design is being heralded as a hero after attempting to save the lives of two people from a burning car following a three-vehicle accident. Early Sunday morning, a 2013 Ford Fiesta crashed head-on with a 2013 Ford Edge in a suburb of Detroit. A second collision occurred when a 1997 Buick LeSabre also crashed into the Fiesta. That crash pushed the Fiesta back towards the Edge, which had caught fire. Thankfully, Fiat Chrysler Designer Ralph Gilles was driving by following the accident and was able to use his Jeep Wrangler to push away the fiery Ford Edge from the Fiesta which had two passengers trapped inside.

Gilles was coming home from an event with his wife when they encountered the accident and said they “were the first (ones) on the scene.” The driver of the Edge was able to escape his fiery vehicle and it turned out that they were under the influence. Gilles didn’t want the burning Edge to have the fire spread to the Fiesta with two trapped passengers so he used his Jeep to push the Edge away. “I still have no idea where that (thought) came from,” Gilles said. “The only thing I can remember thinking (is) I’ve got a Jeep, it’s got a bumper on it, I think I can do this. All I could think about were the two people still inside the other car.” He pushed the burning Edge to the opposite shoulder. “I figured the fire department would take a while to get there . . . At that time of day. I had to do something fast,” Gilles said.

Sadly, one of the passengers in the Edge ended up dying from her injuries. Misty Considine, 57, died at Royal Oak Beaumont Hospital hours after the accident. Addison Fire Chief Jerry Morawski called Gilles a hero. “That guy did a pretty heroic thing… I think the guy did a great job… (If he hadn’t taken action,) it could have been worse.” However, Gilles doesn’t consider what he did to be heroic.

Whoa…haven’t checked my Twitter in a bit. Just saw all the kind words about last weekends sad events. I am no hero just was there at a critical time. Thank you all for the kind words. Respect to all the true daily heroes our first responders!

Gilles did praise his Jeep Wrangler for pushing the car on fire. “I give the Jeep a lot of credit because had I been in my (Dodge) Challenger, I wouldn’t have had the traction to do it,” Gilles noted. “Luckily, we had the Jeep that night. I put it in four-wheel drive and it worked perfectly.”