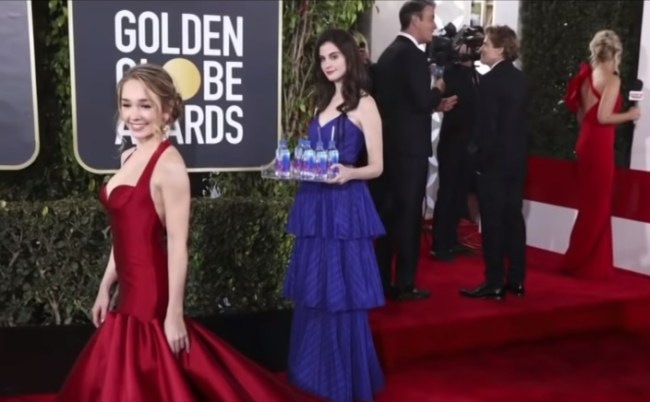 How do you plan on becoming famous? Developing a cure for cancer? Getting elected as the President of the United States? Becoming the CEO of a giant tech company? It turns out that you can become world famous simply by handing out bottles of water. It appears that 2019 is going to be even wackier than 2018.

With all of the celebrities at the 2019 Golden Globes, there was one person who captured the attention of everyone — the Fiji Water Girl. A young woman was handing out Fiji water to celebrities walking the red carpet. The internet became instantly obsessed with the Fiji Water Girl more than any Hollywood star.

This woman holding FIJI Water at the #GoldenGlobes truly came to SERVE. pic.twitter.com/Aln54zOhKY

The sleuths on the internet tracked down the true identity of the Fiji Water Girl within an hour of her going viral for photobombing celebs such as Jamie Lee Curtis, Nicole Kidman, Amy Adams, Dakota Fanning, and Idris Elba. Apparently, she is Kelleth Cuthbert and she is now famous.

Not the worst way to spend a Sunday…

Cuthbert is a 5-foot-9 Wilhelmina model from Toronto, Canada who now lives in Los Angeles. She was one of four Fiji Water girls at the 2019 Golden Globes. “Needless to say this has been the strangest day of my life,” Kelleth said of her sudden fame.

Cuthbert told the TorontoVerve that she “grew up with a focus on traditional values, believing I was obligated to follow a post-secondary education in order to get a normal 9 to 5 job.” Previously, Cuthbert “used to work in mental health and addiction counseling” and has a degree in social work.

I hate to be the bearer of bad news, but sorry my dudes, she is married to a photographer named Christopher Von Steinbach, “who she met in 2010 on a photoshoot she set up to bolster her portfolio,” according to the Daily Mail.

“I do love a good meme, so I think it’s incredibly ironic and funny that I’m one now. The first meme of 2019, apparently!” Cuthbert told Glamour. “My husband is laughing very hard about all of this. … This is something I would go viral for. I feel like I’ve been photobombing people since I was a kid.”

There are hardworking men and women braving the intense heat of the Bronx in mid-summer to sell bottles of water to fans walking to Yankee Stadium in the middle of a humid 97-degree day with the putrid stench of a sewer nearby, but are they famous? Not one. This woman hands out water bottles once and goes super viral. We have a very weird culture.

Back in LA to continue my love/hate relationship with it. 🌞