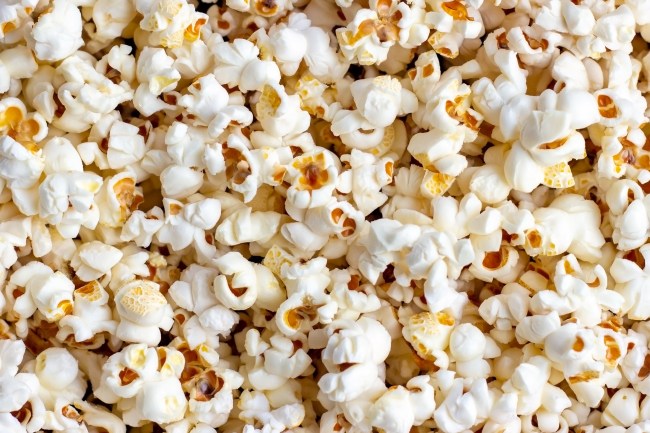 A firefighter was knocking on death’s door after eating popcorn. He ended up with a kernel lodged in his teeth that he attempted to dislodge using ‘a pen cap, a toothpick, a piece of wired, and a nail.’

Within a week he was coming down with flu-like symptoms (fatigue, sweats, headaches) which in turn led to a heart murmur which landed him in the hospital. It all could’ve been prevented with a trip to the dentist but who the hell wants to go to the dentist to remove a popcorn kernel?

The popcorn, stuck between molars on the left side of his mouth, plagued him for three days — but no matter how hard he tried, he couldn’t dig it out.
A week later, Martin developed what he thought was a cold, which then grew into what was assumed to be the flu — and on Oct. 7, he went to his family doctor, who diagnosed a mild heart murmur and sent him for blood tests and X-rays. Both came back showing nothing more than slightly raised inflammation markers.
Martin was sent home with medication, but a few days later, he was still experiencing “flu-like symptoms.” He also developed a blood blister on his toe — which was later diagnosed as a Janeway lesion, an external indication of infective endocarditis, the CDC reports.

Endocarditis can lead to bacteria spreading through the bloodstream and damaging areas in the heart. If treatment is delayed, endocarditis can damage or destroy heart valves.
Alternately sleeping too much and dealing with intense leg pain, Martin finally went to the Royal Cornwall Hospital on Oct. 18.
“I had a feeling there was something seriously wrong,” he told South West News Service. “I was admitted to hospital the same day for tests. By this point I was very worried. I felt quite ill and I knew I was not right at all.” (via)

According to reports, the infection had eaten away the valves in his heart and his heart had pretty much stopped working. All from a popcorn kernel stuck in his teeth. Just how close was he to death? Pretty fucking close. At least based on the infection scale numbers:

“The doctors told me if I hadn’t gone to the GP when I did, then I could have been dead in three days,” Martin said. “Most people die when they are at 350 on an infection scale and I was at 340. The infection had eaten my heart valves completely.” (via)

Popcorn’s scary stuff, my dudes. One of the more terrifying moments I experienced in college came on a night when I was studying for a Biology exam. We were going through the STD section of the class and drifted off to sleep that night with horrifying images of genital diseases burned into my mind, but not before I made popcorn as a snack and fell asleep eating it in bed.

Upon waking up, I went to the bathroom to drain the pipes as one does. I look down and my life flashes before my eyes. I think there’s wild ass disease on the family jewels that grew overnight. After panicking for a few minutes I eventually just touch it and realize a popcorn kernel had gotten stuck overnight and it wasn’t some crazy disease at all, it was just my fat ass eating in bed.

If you want to read the full story on this guy’s wild popcorn ordeal you can click here to visit the NYPost.