Videos Of Fire Tornado As Wide As 3 Football Fields, As Hot As 2,700 Degrees With 165 MPH Winds 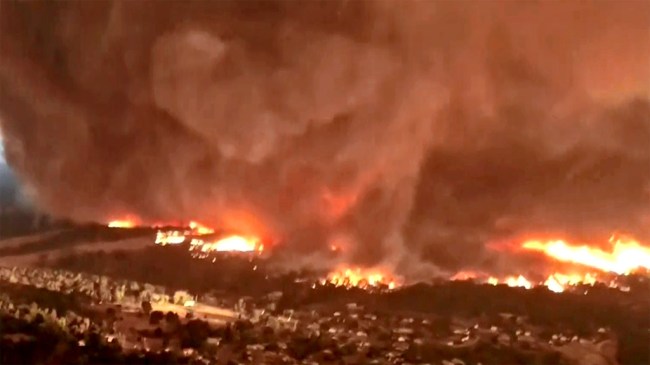 California has been ravaged by wildfires all summer and the destruction they cause is beyond belief. As if brave firefighters in Cali didn’t have enough on their plate, there are even fire tornadoes being fueled by the deadly blazes. Video of the most intense fire tornado ever in the history of California was recently released.

New video of the fire whirl that occurred on July 26th. It was determined winds in excess of 143 mph or equivalent of an EF-3 tornado! pic.twitter.com/AJjVYUlHRA

The California Department of Forestry and Fire Protection (CAL FIRE) released videos of the overwhelming firenado that was 1,00-feet-wide or as wide as three football fields this week. The fire whirl engulfed the town of Redding on July 26th. The firenado destroyed anything and everything in its path with peak temperatures as hot as 2,700 degrees in the vortex and winds as strong as 165 mph.

The wildfire is one of nearly two dozen burning across the state. https://t.co/5u3t4XuFYr pic.twitter.com/a7h5kfxuvS

Scientists are bewildered by the magnitude of this fire whirl.

Sadly, last month’s firenado took the life of one fearless firefighter. Longtime Redding Fire Department veteran Jeremiah “Jeremy” Stoke was helping residents evacuate when the fire tornado spun his way. The 37-year-old radioed out a mayday call and said he was getting burned over. Then his transmission stopped.

The Carr Fire is still laying waste of the area and has burned more than 214,000 acres.

But California wasn’t the only place to feel the terrifying wrath of a firenado. The Ravensbourn Plastics Ltd factory in Swadlincote, UK, was ablaze last week and unleashed a fire tornado.

Firefighters have captured footage of this fire tornado – or "firenado" – while tackling this morning's plastic pallets blaze near Swadlincote. It happens when winds mix with smoke and flames 🔥🌪 pic.twitter.com/nIG3sR2QCG

A fire tornado goes by several names including fire whirl, fire devil, fire tornado, firenado, fire swirl, fire twister, and fire vortex. Fire whirls are created by the dry, hot air on the ground. The heated air rises from the ground and creates vertical columns that go upwards until they can cool at a higher altitude. The fire whirl has objects set on fire and ash in the vortex as erratic winds help form the fire whirl. If the heat from the moving Hell inferno wasn’t devastating enough, the powerful winds can toss trees and poles to cause more destruction.