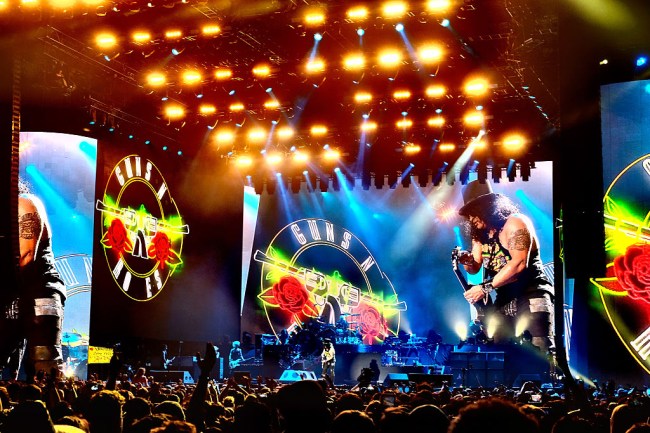 Summer’s string of a million music festivals has come and gone, now it’s time for the real shows. No more fighting 105-degree heat between sets while your two favorite artists play at opposite ends of a festival, all a while the group in front of you appears to be on senior spring break and headed to a rave.

Nope, now your favorite artists get to play a show the way they want because the stage and venue are their own. The Fall concert circuit is packed with great shows, from classic rock to up-and-comers but here are the five shows you can’t stand to miss.

This is NOT your older brother’s Guns N’ Roses, this is your Dad’s Guns N’ Roses. That’s right, GNRs Not In This Lifetime… tour brings Slash, Axl, and Duff together for the first time since 1993.

The band is back, legit making any city on their tour into Paradise City.  If you’re not trying to see Slash shred a double-neck guitar while Axl goes crazy on stage like a bouncy-ball, then I hope you end up walkin’ in the cold November rain.

GNR just slayed Rock In Rio festival, now they’re primed and ready to channel 32 years of rock & roll and welcome you to the Jungle.

BUY TICKETS TO THE JUNGLE

Hov, fresh off the release of 4:44, is hitting the road in a big way. Jay is embarking on a 31-city tour, to make it even better, Hov is bringing Vic Mensa along the way.

Jay has been pumping out hit after hit after hit for over two decades, and I can personally attest to his live show. It’s fine-tuned, high energy, and puts any greatest hits album to shame. On top of that, Vic Mensa is an absolute beast of an artist. His lyrical content and vocal delivery both land like a one-two haymaker combo.

Catch one of the biggest upcoming names in hip-hop with the GOAT while you can, this tour is guaranteed to be bangin’.

If you only know Halsey from The Chainsmokers song that you continues to haunt you a year after its release, don’t hold it against her. This girl has some serious pipes and her latest album, Hopeless Fountain Kingdom is straight up bangarang. On her sophomore album, she combines a retro style of rock and funk with a smooth production of pop that makes you want to belt lyrics from the top of your lungs.

The craziest thing about Halsey, she’s one of those pop-singers that actually sounds amazing during their live show. Take it from me, I’ve seen her and she is the realest of deals. You’ll be glad you caught this tour, bonus points: it’s an amazing date opportunity. So surprise your girl with tickets to this huge 30-show tour.

Check out Halsey’s Alone, it’s a 70s jam with a production value of a modern banger:

What used to be one of the best-kept secrets, hidden behind dark whiskey and bluegrass music is now a megastar and one of the most respected names in the music industry. Chris Stepleton is nothing short of amazing, from the power of his pen to the range of his voice.

You know Chris Stapleton is the real deal when you learn he’s written six number-1 songs on the country charts, was nominated for seven Grammys (two of which he won), been covered by everyone from Adele to Chris Pratt, and shared the stage with artists like JT and Kings Of Leon. If you like rock, blues, country, folk, R&B, funk or bluegrass music then Chris Stapleton is worth a listen.

Grab some whiskey, your boots if you have them.

Luckily for the fans, the music never stops. Bob Weir and the Rhythm Devils found a whole new sound with Oteil Burbridge dropping bass bombs and John Mayer showing off what ten full fingers can do for Jerry Garcia’s legacy of tunes. The most fun thing about Dead & Company is that it’s accessible to everyone: John Mayers, Deadheads, casual jam band fans, and a classic rock lovers. That big Shakedown Street opener will have you groovin’ like your parents at Merriweather Post Pavilion in the ’80s.

Don’t be left out while everyone’s doin’ that rag…