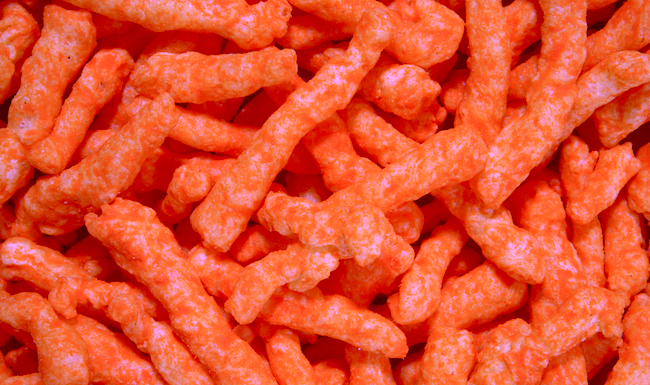 Over the past few years, Cheetos have secured an unlikely spot in the culinary spotlight as more and more people in the food industry realized the one thing their cuisine was missing was cheese-flavored corn puffs best known for being the second-most popular item among stoned people at convenience stores behind Arizona Iced Tea.

The culinary versatility of Cheetos has been put on full display thanks to Taco Bell burritos and movie theater popcorn in addition to being the inspiration for a pop-up restaurant in New York City last year. The menu featured a number of dishes showcasing Cheetos as a central ingredient— including a few options that came with an extra kick thanks to the inclusion of Flamin’ Hot Cheetos, a snack that true junk food aficionados know is one of the best options out on the marketplace.

FHCs— which have an amazing origin story— got a major visibility boost a few years back when they were immortalized in the Y.N.RichKids classic “Hot Cheetos and Takis,” and it seems like they’ve only continued to increase in popularity based on entirely anecdotal evidence. They burst into the mainstream when Burger King had the good sense to unleash Flamin’ Hot Mac and Cheese Sticks into the world, and it appears the movement is only continuing to grow.

The innovators at Drill’d Ice Cream in Fountain View, CA  recently realized there was one market no one in the industry had cornered and decided to add a new flavor to the menu in the form of “Hot As Hell.” The creation involves chunks of Flamin’ Hot Cheetos mixed with vanilla ice cream that is ultimately garnished by the snack.