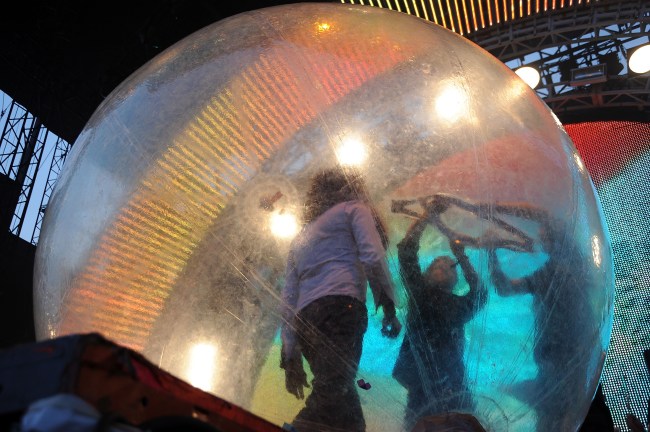 The Flaming Lips are no strangers to using inflatable bubbles on stage. I remember seeing them do a late-night set at Bonnaroo years ago where the frontman Wayne Coyne was in a bubble for part of it. So if anyone in the music business was ready, willing, and able to put on a full bubble concert it was The Flaming Lips (and they did it).

Side note: if you asked me which city and state The Flaming Lips got their start in I think Oklahoma City, Oklahoma would’ve been near last on my list. I don’t mean this as a knock on Oklahoma at all, I just can’t off the top of my head think of many (any?) major music acts that got their start in OK City….Well, now you’re going down a rabbit hole with me and getting a look into my scream of consciousness, I’m over here scrolling the Wikipedia page for ‘Famous People, Sub Category Musicians’ for Oklahoma City. There are a few Country Music musicians (Vince Gill is one) but the list is slim. The most famous name from OK City I’m seeing is Nick Offerman’s wife actress Megan Mullally.

Anyway, The Flaming Lips pulled it off. They put on a live concert where each fan was housed inside of a personal inflatable bubble. All I can think about is being up close to the singer and having to take a piss and realizing you’re trapped in there and won’t be able to move until every bubble around you leaves or everyone deflates their bubbles.

The concert was held at the Criterion in Oklahoma City and it was really more of a test run for future concerts than it was anything else. The clips from the event are pretty surreal:

Yesssssss!!! Thsnk you everyone for helping !!!!!

According to Consequence of Sound, Coyne recently said the band is looking to scale this up:

Fans at the bubble concert also shared pictures from the shoot, and frankly seeing people dressed for a night out at a venue is a welcome shock of nostalgia. “Wouldn’t mind spending every show in my own little bubble,” wrote one attendee. “Huge shoutout to @waynecoyne5 and the flaming lips for finding ways to put on this amazing night while keeping us safe.”

Last week, Coyne said the Flaming Lips were working on a version of their live show that would allow for three people to a space bubble. “We think maybe playing two shows a night, and getting a big audience in there each time,” he said, adding, “The place that we’re at at the moment, it holds almost 4,000 people, but it only holds a hundred space bubbles. So it’s a lot of space in there.” (via)

I love live music as much as anyone. I miss live music as much as everyone. I’ve been to literally hundreds and hundreds of concerts and cannot wait to get back to that but the idea of seeing a full concert inside of a bubble sounds horrible to me when the other option is an outdoor venue where I sit in the bed of a truck.

Sure, most people in the world have a pretty unfavorable view of the state of Florida right now (my home state) but our weather allows for outdoor concerts all Winter. Bands can just come on down here and put on some distanced ragers without having to perform in the snow.

Earlier this month, NPR released their ‘Tiny Desk Concert’ with The Flaming Lips where the band members were inside of bubbles so if you haven’t seen what the normal schtick looks like this is a cool performance with perfect acoustics.

Okay, I lied, I’d probably stand inside of a bubble to see The Flaming Lips put on a Yoshimi Battles concert indoors.