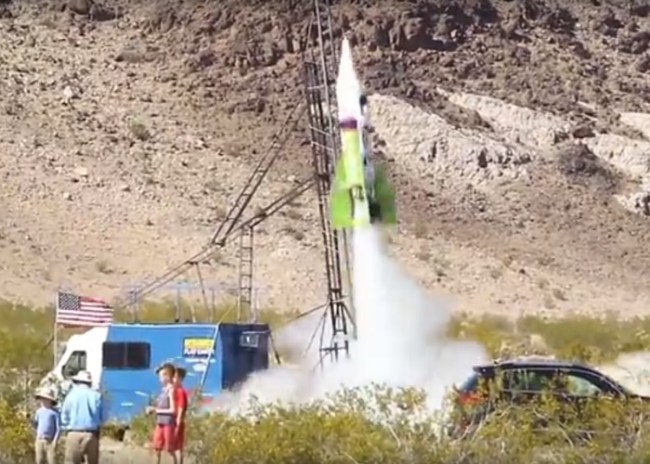 “Mad” Mike Hughes truly believes that the Earth is flat, but instead of lazily posting conspiracy theory YouTube videos like most flat-earthers around the globe, he is out there trying to prove that the planet is not a sphere. Mr. Hughes built his own homemade rocket to blast into the sky and attempt to see for himself that the Earth is flat. On Saturday, Mad Mike and his rocket were launched an impressive 1,875-feet into the air.

Hughes is a 61-year-limo driver and self-educated rocket scientist. To power his self-built rocket, Hughes went with steam power, a technology that has been around for over 2,000 years. The steam-powered vessel was launched from a ramp made out of a mobile home and was able to reach an estimated 350 mph before Hughes deployed his parachute. Hughes wanted to blast off at 350 psi, but didn’t want to risk having another canceled launch and jetted off at 340 psi in a deserted area near Amboy, California.

On the descent, Hughes was falling at such a fast rate that he was forced to deploy a second parachute. The rocket made a hard landing in the Mojave Desert and broke off the nose of the rocket like it was designed to do. Mad Mike had to be pulled out of the airship by paramedics and was a bit shaken up, but walked it off.

“I manned up and did it. This thing wants to kill you 10 different ways. This thing will kill you in a heartbeat,” Hughes said. “Am I glad I did it? Yeah. I guess. I’ll feel it in the morning. I won’t be able to get out of bed. At least I can go home and have dinner and see my cats tonight.”

The launch was originally scheduled in November and several re-launch attempts were nixed because of logistical issues, weather conditions, and warnings from the Bureau of Land Management. We’ll have to wait to see what data Mad Mike and his steam-powered rocket discovered on their brief flight. It’s still wildly impressive that he created his own rocket, shot into the sky, and actually lived to tell the tale.

As all great scientists, Mad Mike will attempt another test that will take him far, far higher than 1,875-feet. Hughes said he next wants to build a “Rockoon,” an aircraft that is half rocket, half balloon. The rocket will be carried into the atmosphere by a balloon, then the rocket will blast off and reach an altitude of about 68 miles. The Karman line, which “commonly represents the boundary between Earth’s atmosphere and outer space,” is 62 miles into the atmosphere. Mad Mike, please be careful, at that height the pressure and lack of oxygen might be difficult to survive and I don’t think you’ll walk away with an achy back by landing with two parachutes.