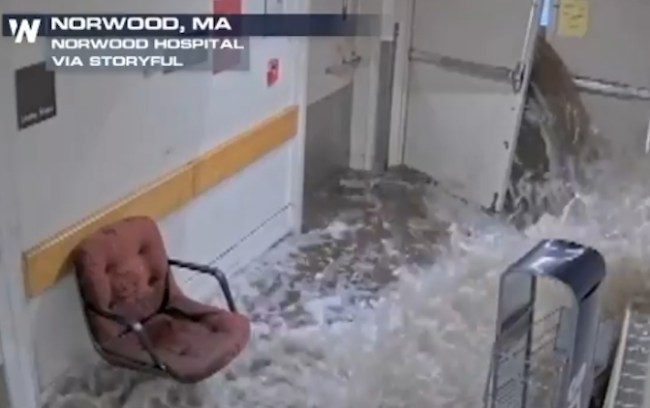 A house contractor once told me “if there’s a crack or hole, water will find it, no matter how damn tiny”

In this case, the water didn’t wait to find a hole, it knocked on the damn door and show itself around the place.

A new video was released online of a flash flooding that forced the closure of Norwood Hospital in Massachusetts back in June. Nearly six inches of rain fell in just a few hours back on Sunday, June 28, and the hospital walls and doors were no match for the raging waters.

CBS Boston is reporting that more than four feet of water was measured in the facility’s basement when all was said and done.

NEW THIS MORNING – 👀 New released video of a flash flood event in June has our eyes wide open this morning. Watch as a stupendous amount of water suddenly floods a hospital as caught on CCTV during a #storm that damaged the hospital with major repairs needed after. Wow! pic.twitter.com/qb2JRhaf2L

It’s crazy how the water slowly opens the doors, as if to look around for security, and then just decides “screw it! Let’s make our move!”

A hospital spokesperson told the news that the flooding “took over the building from all six sides” including the roof and foundation.

Two people were temporarily trapped during the disaster, but no injuries were reported.