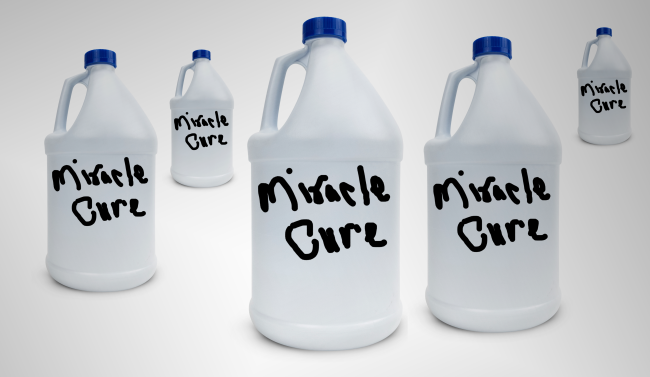 A Florida “church” leader and his family were charged by federal authorities with selling $1 million worth of toxic bleach as a “miracle cure” for everything from COVID-19 and Alzheimer’s to cancer and autism.

Seriously. They found enough people out there who believed their bleach was a “miracle cure” for these and other ailments that they raked in more than a million dollars selling it.

According to a press release by the U.S. Attoney’s Office – Southern District of Florida…

According to the indictment, the Grenons, all of Bradenton, Florida, manufactured, promoted, and sold a product they named Miracle Mineral Solution (“MMS”). MMS is a chemical solution containing sodium chlorite and water which, when ingested orally, became chlorine dioxide, a powerful bleach typically used for industrial water treatment or bleaching textiles, pulp, and paper. The Grenons claimed that ingesting MMS could treat, prevent, and cure COVID-19, according to the charges. The FDA, however, had not approved MMS for treatment of COVID-19, or for any other use. Rather, in prior official warning statements, the FDA had strongly urged consumers not to purchase or use MMS for any reason, explaining that drinking MMS was the same as drinking bleach and could cause dangerous side effects, including severe vomiting, diarrhea, and life-threatening low blood pressure.

These Grenon must be some serious snake oil salespeople.

The Grenons “sold tens of thousands of bottles of MMS nationwide, including to consumers throughout South Florida, according to the allegations.”

Oh yeah, their church? The Genesis II Church of Health and Healing? Yeah, that was fake too.

They Grenons are accused of creating the church “to avoid government regulation of MMS and shield themselves from prosecution.”

Their “miracle cure” was being manufactured in a shed in Jonathan Grenon’s backyard in Bradenton.

They also allegedly threatened a federal judge who was presiding over a civil case against them and said if the government attempted to enforce the court orders halting their distribution of MMS, the Grenons would “pick up guns” and instigate “a Waco.”

Wow. If there isn’t a documentary about this family on Netflix by the end of May then we have failed as a society.