These Florida Fans Pranking Tailgaters With A Fake Snake Is Cruel, But Extremely Entertaining 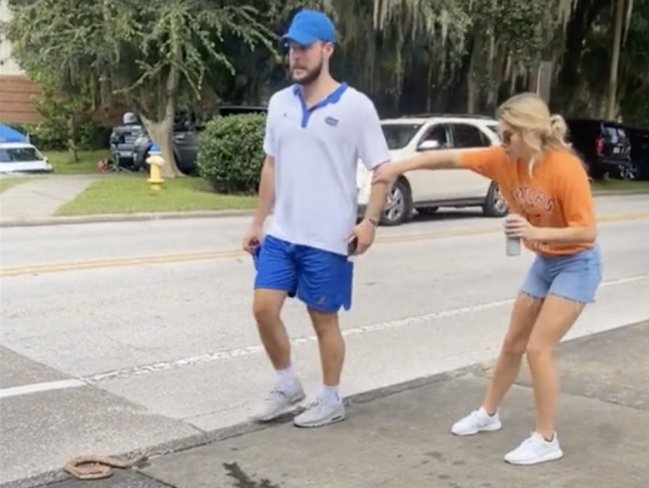 The Florida Gators gave the Alabama Crimson Tide just about all it could handle on the gridiron on Saturday. However, it was the fan performance before the game that we’re going to be talking about here.

I, admittedly, do not know anything about UF’s tailgate scene. However, I would venture to guess that it is closer to a Florida State or Pac-12 school than it is The Grove at Ole Miss or The Quad at Alabama.

From appearance alone, it seems as though much of the tailgating is done all across campus, and the college kids begin their game day at a greek house. I could be wrong, but that appears to be the vibe.

Nevertheless, I do know that Florida fans can get lit with the best of them. And I also know that it’s a pretty sizable campus that can require a lot of walking, and thus, there is a lot of foot traffic on Gameday.

To take advantage of the many passersby, one group of students decided to play a prank. They placed a fake snake on the sidewalk and tied a fishing wire to the decoy.

As people walked past, ranging from other students to families, they pulled the line and made the snake move. Every single person reacted, but some were more freaked out than others. The entire video compilation from the day is pure gold.

this was so entertaining, we did this for hours 😂 #fyp #prank #ZFlipClackdown

Honestly, I don’t know how this isn’t a thing more often. Pranks on Gameday seem like an underutilized activity and it’s really tremendous content.