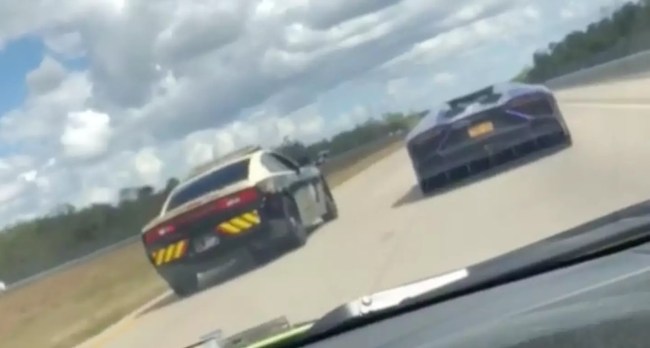 A Florida Highway Patrolman was caught attempting to race a Lamborghini Aventador on a public highway. “Attempting” is the key word because the police cruiser got smoked. The video of the Florida State Trooper racing the Lamborghini in their Dodge Charger Pursuit quickly went viral.

The video was recorded from a third car traveling behind the two street racers. The video does not show the State Trooper giving a ticket, but it does show the Florida Highway Patrolman getting whooped in the street race in broad daylight. The Florida Highway Patrol has opened an immediate investigation into the street racing. “The trooper in question will be held accountable upon any finding of misconduct,” Lt. Thomas Pikul told NBC 2.

Besides the obvious questions about misconduct by the patrolman, the other curious query is: Why did the cop think his police cruiser could take a Lamborghini Aventador? The officer’s Dodge Charger is plenty fast, but it’s not Lamborghini Aventador fast. The Italian supercar zooms 0–60 mph in 2.9 seconds and has a top speed of 217 mph thanks to a 6.5-liter V12 engine that pumps out up to 740 horsepower.