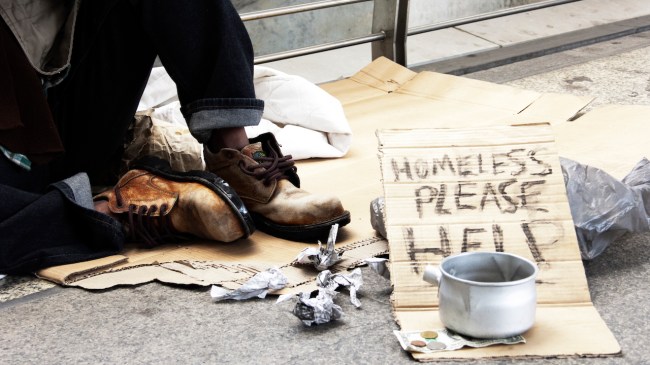 Of all the things Florida Man is, I did not know that being epically petty was one of them.

Usually, when it comes to Florida Man stories, his escapades are happening at 120 miles per hour. He’s doing 80 down I-75 with a kilo of blow. He’s getting his dick bitten off by an alligator because he passed out drunk next to a lagoon. He’s dressed as Batman and kicking police officers in the neck. He’s living life on the edge.

So, when I saw a Florida Man story about him taking time out of his day to systematically uproot the homeless from his community, only one thought came to my mind: my god, Florida Man… he’s evolving.

Long gone are the days where Florida Man was simply known for taking a shit on a lifeguard stand in Del Ray Beach because its the only defense mechanism against the inbound aliens. Now, Florida Man is using the power of public perception to exact revenge on a seemingly lazy homeless man.

According to WBNS 10, gainfully employed Florida Man Ryan Bray has willfully taken to the streets armed with a sign to make sure a homeless man, identified as “Alabama”, does not receive any money while panhandling.

“I offered him $15.00 an hour to do yard work for me and he refused. If we as a community stop paying them, they will leave our neighborhood!” the sign reads.

Speaking to WBNS 10, Bray says that he offered the Alabama a job doing yard work. When Alabama refused and Bray did not give him any money, Bray claims that “Alabama” threatened to “rape my mother and kill my wife”.

Of course, Alabama said he was never offered a job:

“He didn’t offer me nothing, buddy. I never had no trouble until this dude shows up. Just because he’s got money don’t mean as homeless people we don’t have rights,” Alabama said.

Bray now says he’s committed to “shadowing” Alabama with his sign to ensure that he doesn’t receive any money from any highway philanthropists, thus wrapping up what may be the pettiest Florida Man story you ever read.