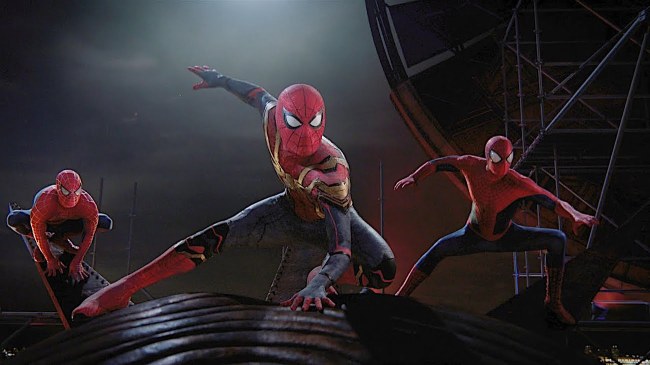 While Ramiro Alanis — Twitter user @agalanis17 — may have (allegedly) seen Spider-Man: No Way Home a staggering 292 times, he’s certainly not the first or the last to pull such a stunt.

My brain immediately goes to when Captain Marvel came back out in 2019. Despite largely being considered a lower-tier Marvel movie, there were obsessive fans nonetheless, as Carol Danvers herself Brie Larson posted an Instagram story with a man who (also allegedly) saw the film 140 times.

This Captain Marvel fanatic was not alone, however, as Wisconsin Man Steve Ruppel apparently saw the film 116 times.

Look, I’m not here to disparage anyone, but the utter temporal and financial commitment to doing things like this absolutely blows my mind to smithereens. No Way Home has a runtime of 2 hours, 28 minutes, so for simplicity’s sake, we’ll round that up to a clean 2:30, which is 150 minutes. 150 minutes multiplied by 292 viewings totals 43,800 minutes.

Now, according to a convenient Google tool, as I’m simply not capable of this math, that’s 730 hours! 730 hours in 30 days, which is an entire month. No Way Home basically came out exactly four months ago today (Dec. 17), which means that Mr. Alanis has spent 25% of his life this year sitting in a dark theater watching No Way Home.

And that’s not even counting the financial calculations! The price of an adult ticket at AMC, the largest movie theater chain in the U.S., is $13.69. Once again, for the sake of clarity, we’ll round up to $14 dollars, which makes Alanis’ total outlay $4,088. Don’t even get me started on the potential cost of snacks.

I respect anyone pursuing their passions, especially when it comes to movies, but at some point, you’ve got to draw a line.