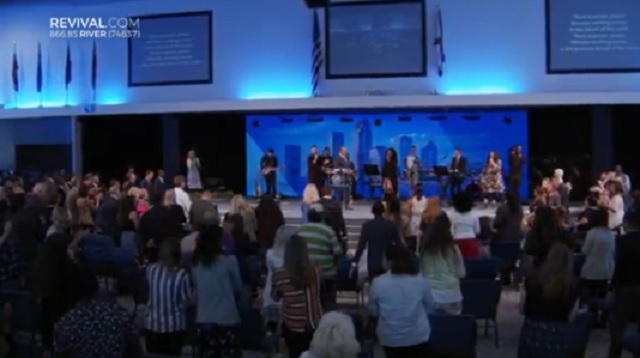 The River Church in Tampa doesn’t care about the guidelines put out by the White House and the CDC that has asked everyone to not gather in groups larger than 10 people.

On Sunday, The River Church was packed with worshipers and Pastor Rodney Howard-Browne, who presides over the church has been defiant about not closing down despite the current spread of illness in the country.

Another angle. "THE RIVER REVIVAL CHURCH" in Tampa. These are the real radicals – putting us all (here in the TB area) in danger. pic.twitter.com/oP127Zvr5R

According to Howard-Browne the church has machines that will instantly kill any virus:

Rodney Howard-Browne will continue to hold services because his church is the most sterile building in America, as it contains 13 machines that can instantaneously kill any virus: "If they sneeze, it shoots it down at like 100 mph. It'll neutralize it in split seconds." pic.twitter.com/Z5PLFXlPfp

The pastor has also claimed that he was going to cure the current illness the same way he cured zika a few years ago.

Right-wing pastor Rodney Howard-Browne cleansed Florida of the Zika Virus and now intends to do the same for the coronavirus … but only for America because obviously he can't be responsible for the entire world. pic.twitter.com/unlu3y0lkq

Right-wing pastor Rodney Howard-Browne is not about to cancel church or prevent congregants from shaking hands because they are not a bunch of "pansies." pic.twitter.com/C36kBIEWqF

It is worth noting that Florida governor Ron DeSantis has been vehemently against a statewide lockdown which has allowed The River Church to stay open.

Gov. DeSantis on calls for a statewide lockdown: "I also look at some of these other states that have done it, and I see massive non-compliance. I'm not even sure how effective it is." pic.twitter.com/Dydhc0SH0H