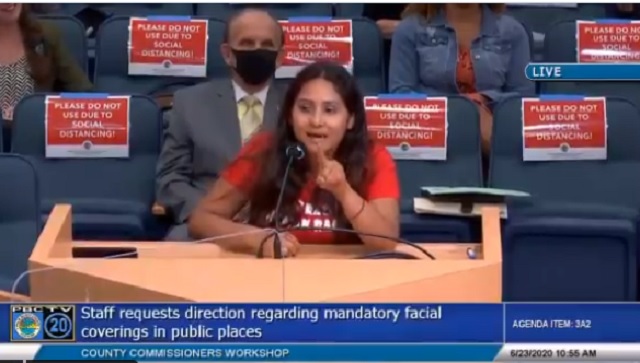 With over 5,000 new Covid-19 cases reported on Wednesday, Florida has the potential to become the next epicenter of the Coronavirus pandemic which has local leaders moving quickly to try to slow the spread of the virus.

On Tuesday, Palm Beach County held a vote on a measure that would require everyone to wear masks in public places.

Before the vote, the county commission listened to several citizens argue against the mandate and things got weird when one woman’s rant went off the rails.

Watch as this lady blames the devil, 5G, Bill Gates, Hillary Clinton and the deep state for the new mask law.

You literally cannot mandate somebody to wear a mask knowing that mask is going to kill people. We the people are waking up…

You cannot escape God, not with the mask or six feet, six feet like I said before is military protocol, you’re trying to get the people to train them so when the 5G comes out they’re gonna scan everybody.

All of you are practicing the devil’s laws, what happened to Bill Gates? Why is he not in jail? Why is Hillary Clinton not in jail? Why are all these pedophiles that are demanding you all to listen to their rules. Why are they not in jail? Is it because you’re part of them? Are you part of the deep state?

Later in the meeting, another woman said that wearing masks would “throw god’s wonderful breathing system out the door”

Floridians angrily claiming masks are the work of the devil because “they want to throw God’s wonderful breathing system out the door.” pic.twitter.com/5pDzU8ncwY

This woman had a vulgar reason on why she didn’t want to wear a mask.

Eventually, Palm Beach County commissioners voted unanimously in favor of requiring face masks to be worn while out in public.