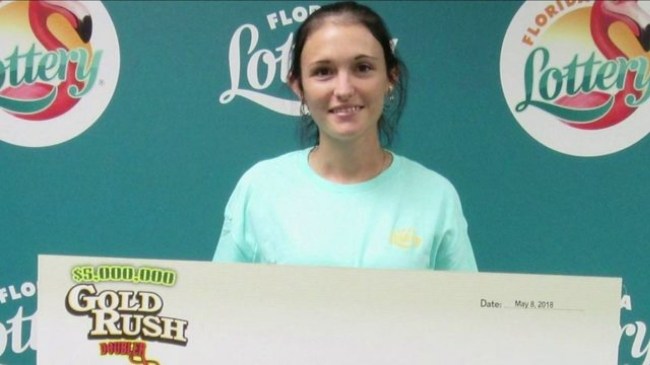 You would imagine that some lucky person who won the lottery would wisely invest the prize money, retire early and live off of the winnings. But did you know that about 70% of lottery winners go bankrupt? Now we have another lottery winner whose life was not enhanced by winning $1 million.

Karlee Harbst is the happy woman seen in the photo above when she won $1 million in the Florida Lottery last year. This was perfect timing because she was pregnant at the time. She had such great luck that she even won $100 the week before her million-dollar jackpot from Florida Lottery’s Gold Rush game. However, Karlee’s luck appears to have run out. Harbst was arrested in a major drug bust in Florida.

Fast forward to last week when Karlee was one of 20 suspects apprehended by police in a major drug bust named “Operation: Smooth Criminal.” The 27-year-old woman from Port Orange, Florida woman was arrested and charged with solicitation to deliver heroin and unlawful use of a two-way communication device. Harbst was involved with a drug ring that distributed heroin, fentanyl and cocaine, according to Florida law enforcement authorities. The arrests came from a series of raids in Volusia County, Florida.

“These are not nice people,” Volusia County Sheriff Mike Chitwood said of the ringleaders of the drug organization.

Harbst had a rap sheet prior to her most recent arrest last week. She had previously been arrested for drug possession, theft, contempt of court and driving with a suspended license, according to the Miami Herald. Instead of using the money to start a brand new life, it sadly appears that Harbst continued her criminal habits.

She won $1 million in the Florida Lottery. A year later, she’s part of a major drug bust https://t.co/DFVgXyY1L8 pic.twitter.com/cqC4HHXyxy

Harbst made her first court appearance Friday for the alleged crime. The moral of the story is that money can’t buy you intelligence.