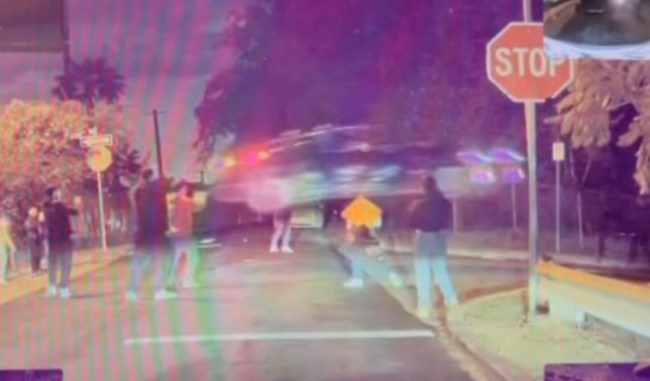 A video of a Tesla flying through the air at the top of Baxter Steet in Los Angeles’ Echo Park neighborhood has gone viral over the weekend. As a result of the extremely dangerous nature of the incident, the Los Angeles Police Department is offering a $1000 reward to anyone who offers information that leads to the suspect’s identification.

My boy had a Tesla rally last night. I was supposed to co-host. Glad I didn’t go. I’m old and washed now. These kids today are wild 🫣 pic.twitter.com/JJWhrP5NO5

According to the official release from the Los Angeles Police Department, the incident occurred at 12:10 a.m. on the night of March 20. The police say that the “rental driver of a black 2018 Tesla S-BLM decided to perform a dangerous stunt at Baxter Street and Alvarado Street, where he collided with several trash cans and two parked vehicles.” Luckily, no one were in the cars that were hit and no one was reported to be injured.

At this time, the police say the driver of the Tesla — which was abandoned at the scene of the crime — has not been identified and there is no description of them.

Now that all of the boring useful information is out of the way, let’s get to the fun part: the internet’s reaction. As is the case with all supremely viral videos, the Yeeted Telsa has inspired some glorious memes, with one person even comparing the footage to the highway car chase scene in The Batman.

😭😭😭 he think he batman pic.twitter.com/Y8E8RGMHSn

Live footage of buddy driving up the hill pic.twitter.com/mJAc4syiqv

Me in the passenger pic.twitter.com/eP5wU14ono

The view from inside the car: pic.twitter.com/kR6oNCxZ4t

Crowd: OMG I hope he has insurance!
Him: pic.twitter.com/NeDgwj2FWr

Me tryna make it to work in 5 mins at a job that’s 26 mins away pic.twitter.com/i3niE0mfdE

The emergency lights watching all this unfold: pic.twitter.com/A380fgnDg5

How it looked like from the bottom of the hill 👀 *reenactment* pic.twitter.com/pcnRo2IAFq

*record scratch* You’re probably wondering how I got here. The driver said she wanted some Hot Takis before the store closed.. Btw, I’m The CAR. pic.twitter.com/7PYf50lZUK

RELATED: Guy Blows Up His Tesla Because He Was Sick Of It Not Working And Getting No Help From The Company