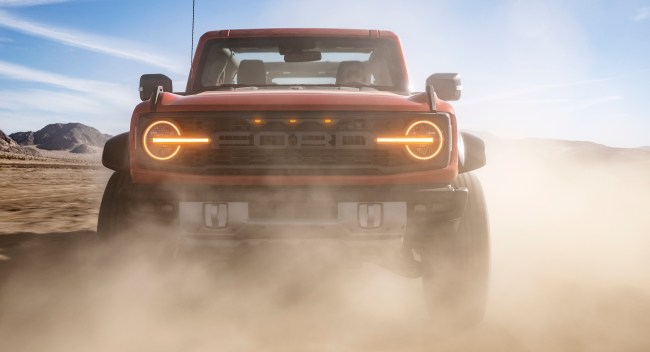 Scientific advancement in the automotive world is a beautiful sight to see. This morning, an official announcement video of the Ford Bronco Raptor was released.

It’s no hidden fact we as consumers want performance and customization in our daily drivers. We’ve learned in the past decade that cars can be supremely functional and fun to drive. So when the world learned Ford is combining its iconic Bronco with the power and pizazz of Ford Performance, fans were stoked.

Under the hood of the Bronco Raptor has a twin-turbo 3.0-liter V-6—which is similar to the type of engine as the Ford Explorer ST. The fact that the Bronco Raptor isn’t a V-8 shouldn’t deter you, it’s engine is built to crank around 400HP.

This is all to say the Bronco Raptor will likely become the best off-roading vehicle in the market.

What’s cool is Bronco’s design chief, Paul Wraith, had this to say about the SUV,

“As the most badass Bronco yet, the Bronco Raptor design is extreme. It’s muscular, while maintaining an underlying simplicity with performance-focused details added only for outstanding high-speed capability.”

The Ford Bronco Raptor is set to be available for order in March. Pricing will start at $69,995, so right under $70k for this beast.

We can’t wait to see Bronco Raptor in action—three cheers for science!