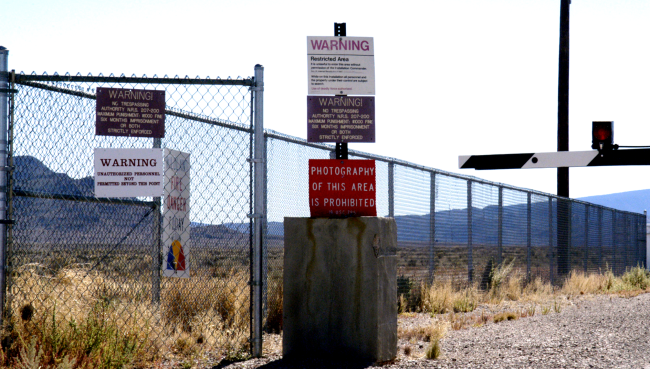 Thornton D. “T.D.” Barnes, a former Central Intelligence Agency (CIA) Radar Specialist who worked on special projects at Area 51, has been trying to blow the lid off the secretive military base for over a decade.

Barnes is a veteran of Army intelligence, was a member of the first Hawk missile battalion deployed during the Cold War, and spent several years on a NASA High Range radar site in Nevada tracking the X-15, XB-70 Valkyrie, and experimental lifting body programs that eventually became the Space Shuttle.

So he’s seen some things.

This week, Barnes spoke to 8NewsNow.com in Las Vegas and revealed new secrets about Area 51, including the secretive military base’s real name.

Barnes has probably done more than anyone to lift the veil of secrecy from Area 51. He’s the head of the Road Runners, a group of former Area 51 employees who came out into the open more than a decade ago to talk about the work they did in the Nevada desert.

Barnes took things further by nudging the CIA to declassify photos and documents about the base, things even the CIA didn’t seem to know, including the base’s real name— “Station D,” which was the CIA’s original name for Area 51. It is also in the title of Barnes’ new, definitive history of the place.

“They had all kinds of documents in there that identified it as Station D,” Barnes said. “They’ve never seen it, but even when I went back to (CIA) historians to get more, they said we’ve never heard of that.”

The designation “Area 51” started in 1958 when the CIA needed to annex land from the nearby atomic testing range to develop the A-12 Blackbird.

Sometime in the ’60s, the “51” disappeared from maps and the military started pretending there wasn’t a base out there at all, even though Russian spy agencies knew it was there.

Lockheed Martin, the aerospace and defense company, referred to it, sarcastically, as Paradise Ranch, which then became The Ranch, then Red Square or The Box.

It has also been referred to as Groom Lake, Watertown, Watertown Strip, Yuletide, St. Elsewhere, Home Plate, Homey Airport, The Site, and Dreamland.

The government has claimed in the past that Area 51 is a NASA weather station or an atomic energy research facility, neither of which was true.

Back in 2009, after the CIA has began to declassify some of the top secret programs developed at Area 51, T.D. Barnes told ABC News, “No one really knew we existed. Even our wives didn’t know where we were going when we left Monday morning and came back Friday evening.”

He also claimed that those who worked on secret government programs at the base were glad people thought there were UFOs there.

“We considered it to be a bonus,” he said. “They made it easier to conceal what we were doing.”

Whether that was yet another cover story or not, as Stanton T. Friedman, a nuclear physicist and top UFO researcher said after CIA documents became decassified, “A lot of Americans woke up to the fact that there’s a lot going on that they don’t get told about.”