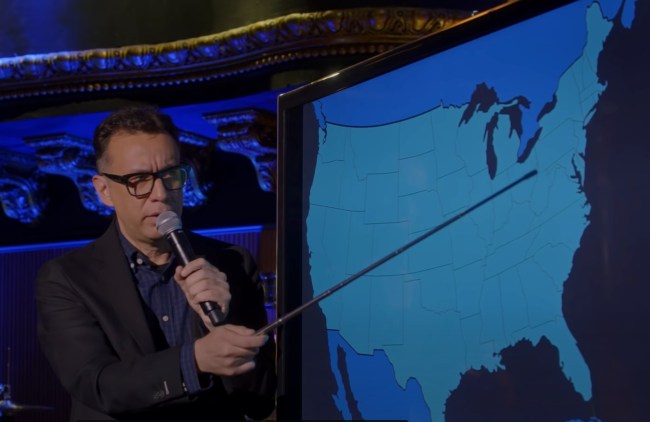 Fred Armisen has appeared in three of my favorite under-appreciated comedies over the past 5 years and I’ve been enjoying him more lately than I ever did during his time on Saturday Night Live. That’s not to say I didn’t think he was great on SNL, he was, I just think he’s really found his stride since the success of Portlandia and his subsequent projects.

If you haven’t watched HBO’s Los Espookys, Big Mouth on Netflix, or The Last Man on Earth which was cut short then you should get on that. Armisen only played a small role as Karl Cowperthwaite (a friendly cannibal) on Will Forte’s The Last Man on Earth but it was still great. And as far as I know there’s only been one season of Los Espookys so far so you can easily binge watch that this week.

Anyway, before I get sidetracked too much, here’s Fred Armisen for Netflix Is A Joke where he breaks down every accent of North America beginning with New England and then across NYC and the Northeast, on down into The South, and then across the rest of America. It all makes me realize how badly I miss traveling to places where people talk like cartoon characters.

If you’re into alt comedies, as in really funny shows that might not fight on a major network, I’m serious about checking out Los Espookys. I wasn’t sure about it at first because it required some degree of reading subtitles but it continued to suck me in with each scene and just got better and better as the season progressed. The premise is “A group of friends turn their love for horror into a peculiar business, providing horror to those who need it, in a dreamy Latin American country where the strange and eerie are just part of daily life.” which is pretty outlandish but it works out great.

Check it out. But not before watching The Last Man on Earth if you haven’t done that already. The timing couldn’t be more perfect.