‘Friday The 13th’ Movie Franchise Possibly Getting Rebooted Thanks To… LeBron James? 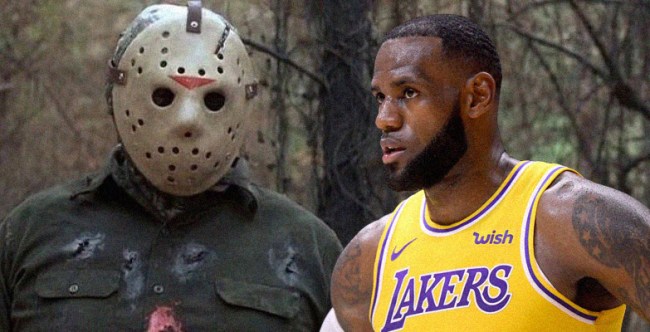 Unbelievably, the Friday the 13th movie franchise stopped at 12 films when the last one was released in 2009. Not 13, but 12. Go ahead and shake your head like I am.

Technically, only 11 of those were actually tangentially related to the first film which came out way back in 1980. The 12th was a reboot of the franchise which ended up going nowhere.

Now though, we might actually get that elusive 13th Friday the 13th movie because… LeBron James is involved? Yes, indeed.

Deadline has confirmed that Roy Lee’s Vertigo Entertainment and LeBron James’ SpringHill Entertainment are in talks to bring Friday the 13th back to the big screen. The news comes in the wake of Universal / Miramax / Blumhouse’s Halloween hitting an all-time opening record for its slasher franchise with $76.2 million which also doubled as the second best domestic debut ever in October.

We hear that meetings are out with directors and writers now. It’s still very early.

Throw in the fact that recent scary movies like IT, Get Out, A Quiet Place, the Purge franchise, and the Conjuring franchise have all been met with great responses from movie audiences and the time may be perfect for Jason Voorhees’ return to the silver screen.

“I’m a huge horror fan. I love horror movies,” LeBron James told ESPN’s Dave McMenamin in 2017. “Obviously, Friday the 13th being Jason Voorhees Day, I think it’s cool. I remember as a kid on Friday the 13th right when I got home from school, my mother and I, we would just watch horror movie after horror movie after horror movie. But no superstitions besides just having a great respect for some of the great slashers of all time, some of the greatest ones of all time. And Freddy (Krueger), Michael Myers, and Jason Voorhees and Chucky and a couple more.”