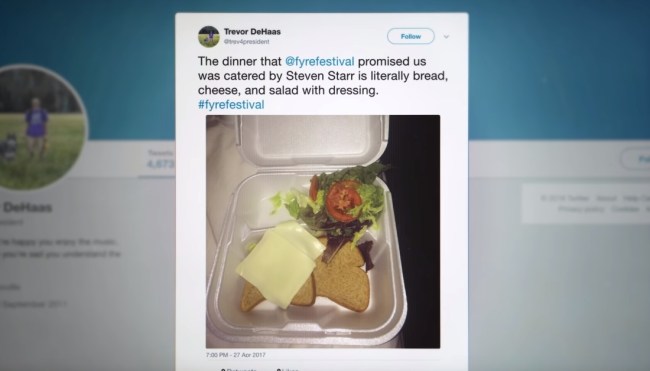 The Fyre Festival is so hot right now. Despite being the dumpster fires of dumpster fires nearly two years ago, the Fyre Festival has risen like a Phoenix from the ashes. A Phoenix that is covered in blueish-brownish porta potty juice and broken dreams of rich LES kids who were promised the festival of a lifetime and all they got was a Lord of the Flies experience IRL. The two Fyre Festival documentaries on Netflix and Hulu respectively, have dragged the Ponzi scheme music festival back from its sad grave. Now in a brilliant marketing campaign, a national chain is attempting to sell pizza by poking fun of the Fyre Festival.

Some astute advertising maven at the Villa Italian Kitchen secured some free press with their latest promotion that skewers the infamous cuisine of Billy McFarland’s Fyre Festival. You may recall the notoriously desperate sandwich that the Fyre Festival was serving that was originally promised to be hip and swanky food from renowned Philadelphia restaurateur Stephen Starr. Instead, the attendees of the doomed music fest got this sad, sad sandwich.

Here is the Fyre Festival sandwich tweet from Trevor DeHaas.

The New Jersey-based casual food chain is reveling in the Fyre Festival fiasco by offering “The Festival Pyzza.” For $25 you have the privilege of receiving the “new luxury pizza experience exclusively for the wealthiest consumers and industry influencers.” The slice of pizza is topped with three unmelted slices of processed cheese with a side of salad greens that don’t have any dressing.

“We wanted to bring the high-end Bahamian festival experience everyone has been talking about lately to our customers nationwide who may have missed out on the real thing last spring,” said Villa Restaurant Group Director of Communications Mimi Wunderlich. “This pizza is so hot it’s almost worth incarceration for mail and wire fraud.”

C’est magnifique! No word on if you’ll have to suck a d*ck to get an Evian water to wash down this gloriously pathetic pizza.