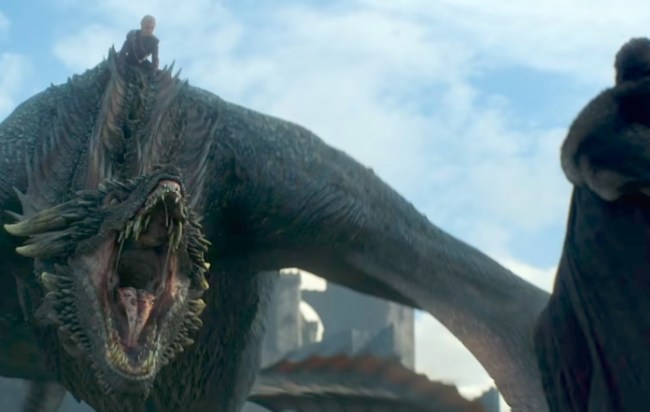 There were so many questions left unanswered following the ending of Game of Thrones. Now we finally get some answers to the most asked questions of the hit HBO fantasy show through new DVD commentary.

Game of Thrones Season 8 DVD will be released next week, but some details have been made public. The home video release has a making-of documentary on the finale titled Duty is the Death of Love, which is the wisdom that Maester Aemon told Jon Snow in Season 1 to explain why the Night’s Watch don’t have wives.

The upcoming DVD content features audio commentary from Emilia Clarke AKA Daenerys Targaryen, as well as showrunners David Benioff and Dan Weiss. The extra DVD commentary answers many questions that hardcore GoT fans have been asking since the show’s finale.

Did Drogon eat Dany, and where did Daenerys Targaryen’s dragon take her after she died?

According to Entertainment Weekly:

“No, Drogon did not eat Dany’s’ body after the dragon carried off its mother across the sea. The dragon was headed towards Volantis. Clarke notes fans told her dragons eat their masters, which the showrunners shot down. ‘Drogon’s not going to eat you,’ Benioff assures. ‘He’s not a cat. Did you see how gently he was nudging you?'”

Why did Drogon burn the Throne?

“The reason Drogon torched the Iron Throne after Dany was killed isn’t specifically spelled out. But Benioff does note a potential insight into the dragon’s thoughts: ‘If [Dany is] not going to sit on it, no one’s going to sit on it.'”

“Jon Snow did not go into the throne room intending to kill his lover, it’s only Dany’s final statements that condemn her. Kit Harington explains what was going through his character’s mind: “He doesn’t know he’s going to betray her until right at the end,” he says. ‘In Jon’s head, it’s a number of [reasons: Dany] doesn’t factor in anyone else’s decisions and it also means [Dany] is going to kill my sisters, so it becomes [my] family vs. her.'”

Where did Arya go?

“Arya, as is implied by the finale, is leaving Westeros to be an explorer.”

Other intriguing tidbits on the DVD commentary about the final Game of Thrones season.

“The showrunners confirm Bran being named king of Westeros is author George R.R. Martin’s planned ending for his books. ‘Bran is the only probably pure person in there,’ Peter Dinklage (Tyrion) notes. ‘And the fact he cannot father children is key because they’ve repeated the cycle in this Westerosi history of heirs being really bad.'”

“This isn’t about a finale scene, but was revealed in the finale commentary: The scene where Jaime (Nikolaj Coster-Waldau) leaves Brienne (Gwendoline Christie) in tears included a secret line that wasn’t in the script. To help provoke Brienne’s grief, the showrunners share that Coster-Waldau said to Brienne a brutal classically Jaime-ish line that wasn’t in the script or in the show: ‘I don’t love you. No one loves you.'”

“Christie learned calligraphy for the scene where she fills out the heroics of Jaime Lannister in the White Book, so the writing is really hers. While this was a short, simple scene, the production spent three days getting it right.”

“Clarke asks the showrunners which season was their favorite, either in terms of the end result or making the season. Benioff says Seasons 4, 6, and 8, while Weiss singles out season 4 because ‘everybody was in a groove but we were so far from the end we didn’t have to worry about the ending…four was peak fun.'”

There are also deleted scenes from Season 8, including Sansa Stark and Tyrion Lannister from the Battle of Winterfell.

Game of Thrones Season 8 DVD as well as the Game of Thrones: The Complete Collection with a cast reunion special hosted by Conan O’Brien will be released on December 3.