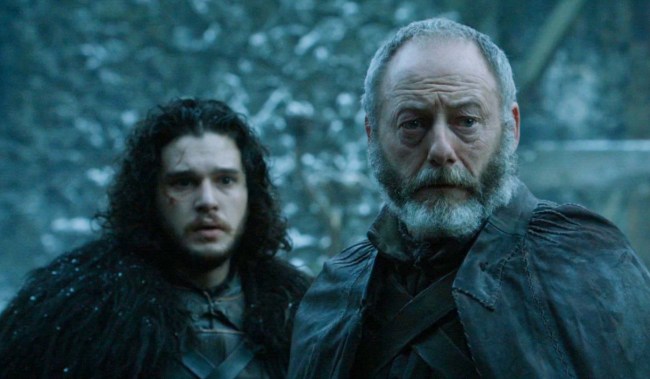 Spoilers ahead. There are plenty of tragic moments from Game of Thrones, but one of the most heartbreaking travesties came in Episode 9 Season 5. That is when Melisandre sacrificed Stannis Baratheon’s adorable daughter Shireen because the Red Woman believed the young innocent girl’s death would please the Lord of Light, who would then melt away the blizzard so the Lord of Dragonstone’s armies could be victorious against Ramsay Bolton’s forces. The weather did clear up, but the Baratheon army was destroyed. Big miscalculation by Melisandre. Shireen’s horrifying death was all for naught. But did you know there was a harrowing Easter Egg that foretold the future before Shireen’s death that involved Ser Davos Seaworth way back in Season 3?

There was a subtle reference way back in Season 3 where Shireen Baratheon was teaching Ser Davos how to read. The first word that the viewing audience sees Davos learn to word is “Aegon.” During the tutoring session, the Onion Knight struggles to pronounce the name of the book titled, “A History of Aegon the Conqueror.” “This word is Aegon,” Shireen said. “When you see ‘A,’ ‘E,’ and ‘G’ together like that, it sounds like ‘egg.’”

Ironically, Ser Davos actually meets an Aegon later in Game of Thrones, and Azor Ahai wasn’t Stannis as Melisandre believed, so she was really wrong. Davos is the righthand man of Jon Snow, or as we now know him as Aegon Targaryen, the son of Rhaegar Targaryen and Lyanna Stark. Good thing Shireen taught Davos how to read and to properly pronounce the name of his boss.

Liam Cunningham, the actor who plays Ser Davos, commented on the tragic Easter egg. “Yeah, they’re very good at that sort of thing. David [Benioff] and Dan [Weiss] plant little Easter eggs there if you want to see them.” But at no point did he realize the significance of the hint. “No, are you kidding me? I don’t know what the hell’s gonna happen from one episode to the next. That’s testament to how good the writing is on that, too.”