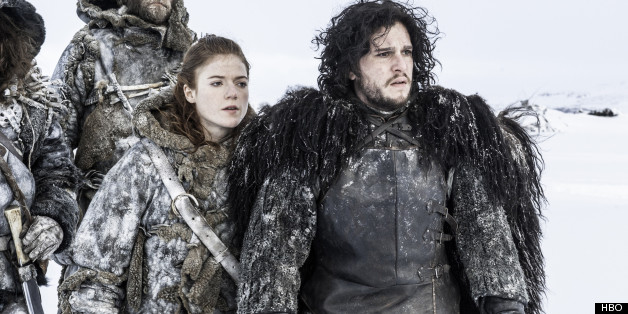 Weddings that happen on Game of Thrones generally don’t turn out to be joyous celebrations. Jon Snow and Ygritte are hoping their nuptials are very anti-Game of Thrones and turns out to be a fairytale wedding. GoT actors Kit Harington and Rose Leslie announced their engagement last month and now they will soon have their wedding and the ceremony will temporarily halt production of Game of Thrones so the cast and crew can celebrate.

Kit Harington revealed that the upcoming wedding with Leslie will happen during filming of Season 8. During Harington’s appearance on the British talk show, The Jonathan Ross Show, the actor said that he contacted Game of Thrones producers to inform them of his upcoming wedding. “I rang [the producer] up and I said, ‘I’m getting married and it’s your fault, actually.’ […] I was like, ‘You need to factor in a Game of Thrones wedding by the way,” Harington said. “They [the cast and crew] have all got to be there so the whole thing has got to shut down.’” The best man and the maid of honor may want to avoid having George R.R. Martin write their speeches.

Harington or Leslie, who met on the set of the TV show during Season 2, have not said where or when the wedding will go down. Pre-production has already started and production is starting soon and is expected to continue until summer 2018. Harington was asked if he and his bride will have a Game of Thrones-themed wedding and wear their costumes from the show. “There is absolutely no chance of me convincing [Rose] of that,” Harington said. Hopefully, the Harington-Leslie nuptials don’t include any pigeon pie or any instrumental versions of “The Rains of Castamere” playing during their wedding.

In other Kit Harington and Rose Leslie news, Jon Snow scared his fiancé so badly with a prank that she threatened to break up with him.