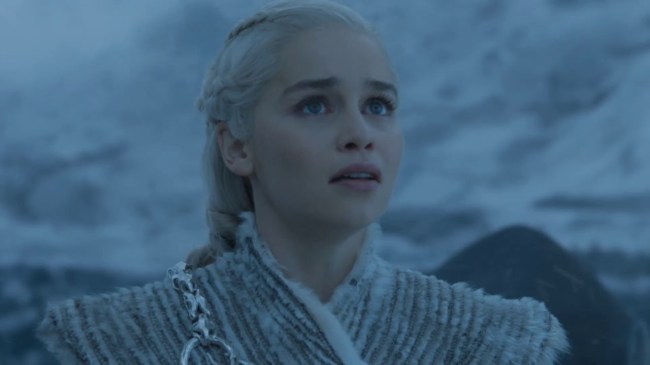 We are only days away from the highly anticipated Season 8 premiere of Game of Thrones! FINALLY. With the final season upon us, we should look at a possible prediction on how Season 8 could end. The newest Game of Thrones fan theory has to do with Daenerys Targaryen’s fate and how the Mother of Dragons could switch sides and become the Night Queen.

This new Game of Thrones fan theory re-examines visions from previous seasons to give us a projection as to the fate of Daenerys Targaryen. If you’ve been re-watching old episodes to get you back to speed on what has already transpired in Game of Thrones, required viewing is Episode 10 of Season 2 titled “Valar Morghulis.” That is the episode where Danerys goes to the House of the Undying in Qarth to rescue her baby dragons.

Daenerys has an elaborate vision where she chooses a door and walks into the Iron Throne room in King’s Landing. The throne room is completely empty and dark. There is snow on the ground and the ceilings have been destroyed. Daenerys gets right up to the Iron Throne, but something keeps her from sitting on the symbolic head of the Seven Kingdoms. One of her dragons can be heard crying.

She walks away from the throne to walk through another door. This one was the gate at The Wall, that the Night’s Watch uses to access the frozen landscape that is north of The Wall. In the middle of the glacial desolation, Daenerys spots a Dothraki tent. She walks in and reunites with her dead husband Khal Drogo and their child. The reunited family are bonding, but once again Khaleesi can’t help but to continue her search for her dragons. She leaves again. Many believe this is an early Game of Thrones spoiler that foreshadows what will happen in Season 8.

A Game of Thrones fan theory examines this scene and suggests that Daenerys Targaryen’s love of her dragons will force her to cut ties with those closest to her and once again abandon her quest to sit on the Iron Throne. The visions could be part of the prophecy that the Lady of Dragonstone will not be able to escape. Redditor marisaann26 has a theory that Daenerys will betray Jon Snow and switch sides in the last season.

Two of the prophecies in the vision have already come to fruition. On her march towards King’s Landing to capture the Iron Throne, Daenerys was drawn to The Wall to battle the Night King and his Army of the Dead. That did not end well as the Night King displayed his all-world javelin-throwing skills and killed Viserion. In the vision, the dragons were crying beyond The Wall, just as they were as Viserion was killed.

When Daenerys Targaryen visits the House of the Undying in Season 2, she is captured by Pyat Pree, who is a warlock from Qarth and a member of the Thirteen. The warlock told Khaleesi: “You’ll be with your dragons through winter, summer, and winter again. For a thousand, thousand seasons you will be with them. Until time comes to an end.”

What if Dany’s other two dragons, Drogon and Rhaegal, were to die in battle from the Night King’s ice javelin or Qyburn’s scorpion weapon?

The Night King could resurrect the dead dragons to become zombie ice dragons like he did to Viserion. The only way for Daenerys to be with her deceased dragon children would be for her to die and join #TeamDead. Would Daenerys switch sides to be with her dragons by becoming the Night Queen?

In an interview with Variety, Daenerys Targaryen actress Emilia Clarke talked about her character’s fate in Season 8. “It f*cked me up. Knowing that is going to be a lasting flavor in someone’s mouth of what Daenerys is… I’m doing all this weird shit. You’ll know what I mean when you see it.” Transforming into the ice zombie Night Queen would qualify as that ending for Daenerys.

There are many subtleties that point to Jon Snow and Daenerys having a baby together. Could Daenerys ditch her lover and child once again to be with her original babies — her dragons?

Reddit user marisaann26 offered another addition to their theory. “We know that the white walkers were taking Craster’s sons and turning them into more White Walkers,” the theory goes. “What if the White Walkers can only change those of pure blood(incest)? That would make Daenerys an important person to the Night King, considering her magic. Also could be possible that the person has to be a sacrifice in order to be turned, meaning Dany will have to willingly give herself to the Night King as a sacrifice.”