The ‘Game Over, Man!’ Trailer Is The Perfect Mix Of ‘Workaholics’ And ‘Die Hard’ 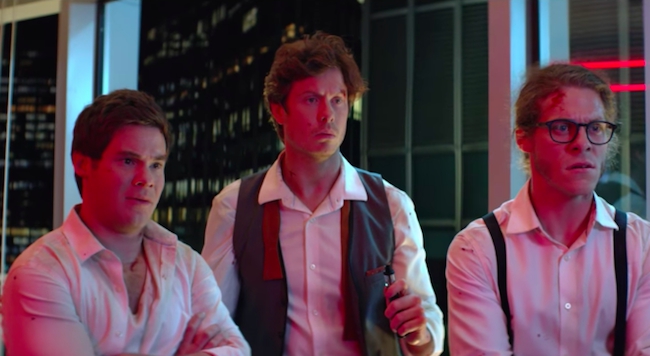 While I’ll begrudgingly admit it’s one of the many television shows that will eventually be lost to time, Workaholics will always hold a special place in my heart. I first stumbled upon it when I was a college student figuring out how to strike a delicate balance between my studies and degeneracy, and it only became more #relateable as I underwent the slow transition from shithead to a semi-functioning member of society.

Workaholics might have fallen off a bit in the last couple of seasons, but I’d be lying if I said I wasn’t a little disappointed when its final episode aired last year. As a result, I was pretty pumped when I heard Netflix had given the green light to a movie from the show’s creators.

We got our first look at Game Over, Man! when a teaser dropped last May, and now we’ve been given a belated Christmas present in the form of an extended red band trailer for the upcoming film that sure to be a hit with anyone who’s a fan of the original series, Die Hard, and the musical stylings of Shaggy.

I don’t think anyone is expecting this to be a critical masterpiece, and I’d honestly be disappointed if it was. All I’m really asking for is an hour and a half filled with superfluous pop culture references, slapstick violence, and at least one more cameo appearance by a celebrity who’s been forgotten by the world. Anything else is really just a bonus.

I’ll find out if my needs will be satisfied when the movie hits Netflix on March 23rd.