‘Game Of Thrones’ Suicide Squad Of Tormund, Jorah, Beric And The Hound Start A Splendid Band 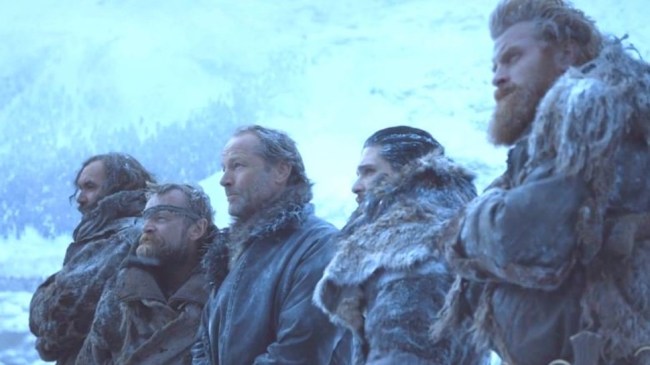 I can’t wait to watch the next episode of “Game of Thrones” on Sunnnnnnn…. OHHHH FUCK NUTS THERE IS NO MORE “GAME OF THRONES” ANYTIME SOON! And it sounds like it will be a very, very, very long time until we get Season 8 of “Game of Thrones.” In the absence of a new episode, we have this musical act composed of some of the greatest warriors in Westeros. Some of the members of the “Game of Thrones” Suicide Squad joined forces to slay audiences with their fun new band.

The actors that play Tormund (Kristofer Hivju), Jorah (Iain Glenn), Beric (Richard Dormer) And The Hound (Rory McCann) have not only come together as a fearsome fighting force beyond the Wall, but have also become bandmates. Kristofer Hivju took the video of the “Game of Thrones” brawlers showing their musical side and dubbed them “Brotherhood Without Banjos.” Ser Beric Dondarrion played the ukulele, Sandor Clegane and Tormund Giantsbane were singing, and Ser Beric Ser Jorah was playing guitar because everyone knows that Mothers of Dragons and Breakers of Chains swoon for acoustic guitar players.

If this whole “Game of Thrones” thing doesn’t work out, these fine gentlemen have a great second career in the waiting, which is important since being an actor on “Game of Thrones” doesn’t exactly have the best job security.